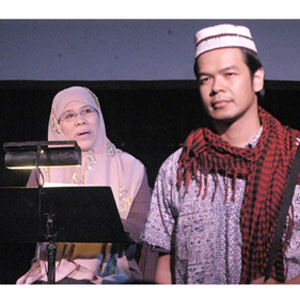 Ang Mga Mananahi (in photo) is one-half of the twin bill play that will be performed back-to-back on October 29-30 (4 and 8 pm), at the Cultural Center of the Philippines.


The Cultural Center of the Philippines and the UP Repertory Company present a twin bill of plays to raise funds for our kababayans who have been forced to flee their homes because of the ongoing tension in Mindanao.

The performances at the CCP will help raise funds to buy food and other necessities for some 900 families or roughly 3,000 people displaced by the war in Mindanao. The fundraising effort is part of the Pikit Relief Mission, which provides assistance to IDPs (internally displaced persons) in the areas of Pikit, North Cotabato. The baranggays of Punol, Macasendeg, Paidu Pulangi, Manaulanan, Kolambug, and Silik have residents who have been severely affected by the armed conflict between government troops and the Muslim rebel groups. Today, in Mindanao, it is estimated that there are some 500,000 IDPs who suffer and bear the costs of war to life and property.

In the play Ang Mga Mananahi, four Muslim women perform an act of bravery as the war rages between the government and Bangsa Moro freedom fighters. The play Ang Bayot, Ang Meranao, at ang Habal-Habal sa Isang Nakababagot na Paghihintay sa Kanto ng Lanao del Norte is the unusual rendezvous of two beautiful and sharp-tongued creatures living on the fringes of society. As they joust and engage each other, they courageously travel the rough roads of discrimination, hypocrisy, bigotry, social divides, corruption, and unspoken violence to arrive at a decent friendship.

The plays are written by Rogelio Braga, whose works have been performed at the CCP, PETA Theatre Center and in UP Los Baños. A graduate of the University of Santo Tomas, Braga has been published in various e-zines, and literary journals such as the Tomas of the UST Creative Writing Center and Ani of the CCP. He is a member of the Philippine Educational Theatre Association Writers Pool, the Writers Bloc Inc and the fictionists' group Naratibo. Nick Olanka (who helmed Ang Huling Araw ng Linggo) is the director of Habal-Habal while Paul Santiago directs Ang Mga Mananahi.

The UP Repertory is a student theater organization based in the University of the Philippines Diliman. Since its founding in 1972, it has been staging socially relevant plays with its primary principle being "reflection of the needs of the greater populace."

For those who wish to make donations in kind to the Pikit Relief Mission, please contact the UP Repertory Company.