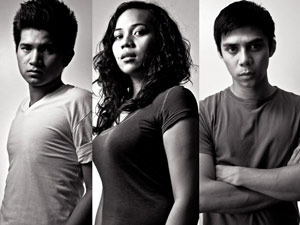 (L-R) Keno Ong, Irene Evangelista, and Eco Dela Sala topbill the Beatles-music inspired play titled Across the Universe. It will be staged by UST Mediartrix from February 2-3 at the University of Santo Tomas, España, Manila.

Celebrate the power of love with the music of The Beatles, as University of Santo Tomas (UST) Mediartrix stages an adaptation of the hit musical film Across the Universe this February 2 and 3.

The production marks the first time the movie will be adapted on stage in the Philippines and will showcase Thomasian students' talents under the direction of Ram Sta. Maria, and Julius Christopher Fonte.


Set in the 1960s during the Vietnam War, Across the Universe revolves around the story of two lovers from different countries and family backgrounds, and their journey as they make the ends of the worlds meet to make their relationship last.


Jude (Hector V. Dela Sala) left his hometown Liverpool to search for the father he never knew. In his search, he unexpectedly met Lucy (Irene P. Evangelista), the sister of his would-be best friend Max (Keno Ong), and the two fell in love instantly only to be separated by events beyond their control. The three, together with their group of musician friends, will find themselves embraced into the anti-war protests, struggles of young love and counterculture movements happening around them which would test their characters and make them all better people.


The two-hour production features some of the Beatles most popular compositions that defined the story's era such as "Hold Me Tight," "Hey Jude," "All My Loving," "Let It Be," and "All You Need is Love."

"Like what Julie Taymor (movie director) said, it's a story of the 1960s seen through contemporary eyes. It has a very passionate and captivating story about love and the sounds of the Beatles, which most of us are familiar of, will surely take us to a ride in this marvelous musical fantasia," said director Ram Sta. Maria.


Its original film version was released October 2007 in the US and received both Golden Globe and Academy Awards nominations.