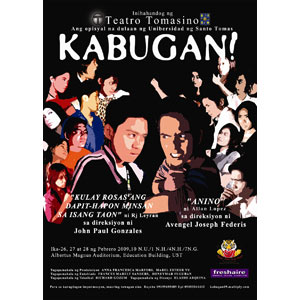 The two mini-plays of Kabugan are "Kulay Rosas ang Dapit-Hapon Minsan sa Isang Taon" and "Anino." It will be staged on February 26, 27, and 28at the Albertus Magnus Auditorium, Education Building, UST, España, Manila.

The first segment called "Kulay Rosas ang Dapit-Hapon Minsan sa Isang Taon" is RJ Leyran's adaptation of John Guare's The Loveliest Afternoon of the Year. This literary piece is set in a zoo where a boy and a girl meet, fall in love, and continue to meet in their same idyllic place. The unexpectedness of the play will bring viewers to a surreal world. The boy and the girl develop a madcap relationship and reality only steps in when the wife of the boy catches them and their fantasy world is brought to an end.

The other segment is called "Anino" by Allan Lopez. It tells the story of a remorseful widow who had a relationship with her stepson and became pregnant. Her husband was found dead. Her guilt causes miscarriage and she eventually murdered her stepson. Until then, she realized that her horrible past continues to haunt her through her conscience.

Kabugan will surely make your hearts beat fast through the romantic rendezvous in "Kulay Rosas" and the thrilling revelations in "Anino." It will be staged on February 26, 27, and 28 with shows at 10 am, 1 pm, 4 pm and 7 pm at the Albertus Magnus Auditorium, Education Building, UST, España, Manila.