PEP REVIEW: I Love You Because shows there is life after love 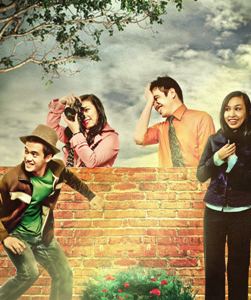 Repertory Philippines is staging I Love You Because until March 8 at Onstage, Greenbelt 1, Makati City. Click HERE to buy show tickets.
Why do we keep falling in love even in spite of paper-thin chances of a
fairytale happy ending?

Until March 8, theatergoers can all get the chance to learn more about this elusive thing called Love and maybe unlearn some of the things we learned about taking chances, breaking stereotypes, and holding on to dear life after
love.

A day before Valentine's day, Repertory Philippines started its run of I Love You Because, a romantic comedy revolving about the lives of four different people licking their wounds from the ravages of love. Determined not to get hurt again, they desperately try to rebound by trying out a different tactic at love and relationships.

Austin Bennet (played by Harold Cruz) is an overly optimistic greeting card writer based in New York. On a Saturday night, he stumbles upon his girlfriend Catherine cheating on him with another man. Heartbroken, he takes up the advice of his slacker of a brother Jeff (played by Gabs Santos) who has sworn off commitment to feign indifference and date other women.

In the other part of the city, Marcy Fitzwilliams (played by Caisa Borromeo), a free spirited photographer has just ended her 27th failed relationship. She confides her pain to Diana Bingley (played by Kyla Rivera of Ryan Cayabyab singers), an uptight actuarian who believes that the mysteries of love can be solved through calculations and proper caution. After much pondering, Diana decides that Marcy needs a six-month rebound time wherein she should go on a series of meaningless dates with guys she fancies at random before she focuses on finding Mr. Right.

In the middle of this problematic scenario, Diana and Jeff chanced upon each other in an online Jewish dating service and agreed to double date. And on a Saturday night, four sad hearts meet in a pub and funny attempts at anti-romance breaks loose!

Will Austin get Catherine back by feigning indifference? Will Marcy find
herself before she finds Mr. Right? And will Diana and Jeff be able to
resist the strange connection they have and commit?

Set in the city that never sleeps, REP veteran Robbie Guevarra creatively established the New York setting by projecting city landmarks as transitions between acts. The simple yet intimate set design of a pub, an apartment living room, a café, and a bedroom, also allowed smoother blocking.

Watching this musical love boat is almost like watching the sitcom
Friends off-Broadway since it remained faithful to the present day New York lifestyle and social norm. Lyricist Ryan Cunningham, and composer
Joshua Salzman brought to life the modern-day antics of Marcy, Diana, Jeff,
and Austin as natural and as funny as possible.

Kyla Rivera is adorable as the smart and edgy Diana while Gabs Santos is great as the simple-minded, happy-go-lucky Jeff. In a scene where they are trying to deny the existence of feelings between them, they perform a simple Charleston dance while singing "We're just friends with benefits!"

In another scene, Jeff tries to convince Austin to give his ex-girlfriend
the cold shoulder so he can win her back. With his arm around his older
brother¹s shoulder he belts out "What difference does a little indifference
make!"

The musical runs for two hours, the same length as the average romantic
movie with a happy ending and it feels like it too.

ILYB is a life manual for the young, heartbroken, and hopeless. While having a good laugh, it will leave you wiser and dumbfounded at the same time, making you realize that while there are clever and practical ways of dodging the love bullet, it the end, we mere mortals cannot go against love when it chooses us.