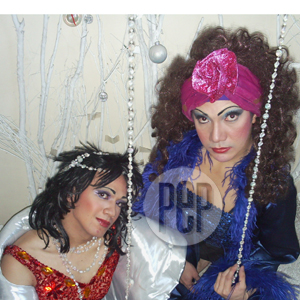 When a homosexual couple's straight son decides to marry a conservative politician's daughter, chaos bursts out of the closet.

This time around, the gay birds will swoop down the skies of Manila in the disco era during Martial Law. Following in the footsteps of the popular and widely-received Filipino adaptation of Whose Wife Is It Anyway? and Mornings at Seven, Repertory Philippines has transported the French Riviera to Ermita, Manila.

Set in a fictitious transvestite club, Birdcage, this adaptation follows the travails of the gay couple George and Albert when George's son from a drunken one-night stand, Emil, comes home to announce that he is getting married.

Excited at first to meet his "in-laws," Albert is crushed to find out that Emil is excluding him from the marriage. The ups and downs of all the hiding and revealing—all set in one evening—provide comic fodder and sentimental situations on the question of gender, identity, sexuality, and family.

This Repertory Philippines' production will have its opening weekend be on March 16, 17, and 18. Performances are scheduled on Fridays and Saturdays at 8:00 p.m with Saturday and Sunday matinees at 3:30 p.m.