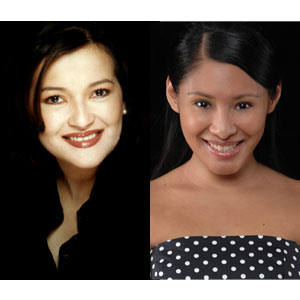 The performances of Pinky Marquez (left) and Carla Guevara-Laforteza (right) in Songs for a New World are well-received by audiences. Watch this production on May 8, 9 and 10 at the RCBC Plaza in Makati City.Click HERE to buy show tickets.

Often described as a cross between a typical musical (described by Wikipedia as "a form of theatre (that combines) music, songs, spoken dialogue and dance) and a song cycle ("a group of songs designed to be performed in a sequence as a single entity"), Songs for a New World by Jason Robert Brown is a collection of stories about change and how people—from a wife who feels neglected by her husband despite living a cushiony life to the wife of Santa Claus, tired of playing second fiddle after all these years—deal with it. There is light after the proverbial tunnel in the end of this revue.


But 9 Works Theatrical's staging of Songs for a New World is different. Director Robbie Guevara (who also directed Repertory Philippines' I Love You Because early this year) decided to weave the songs connected only by theme (instead of narrative or plot) to create a story. This production by the country's newest theatre company offers a fresh interpretation to a popular Off-Broadway hit while trying to remain true to its essence. But did it succeed?


THE PLOT. Direk Robbie's restaging of the play revolves on four central stories. Murray (Felix Rivera) suddenly finds his "ship"-his business-sinking, and his wife Veronica (Carla Guevara-Laforteza), starting to feel abandoned, tries to get the attention of her husband by threatening to jump off the roof of their penthouse. David (Harold Cruz) is torn between two women: the hopeful lover Amy (Anna Santamaria) and the Lisa (Caisa Borromeo), the woman prefers yachts and champagnes over the moon and the stars. Sam "Steam Train" Torres" (Felix) is a basketball player in the cusp of success, until a tragedy changes the course of his career.


Meanwhile, Mrs. Claus (Pinky Marquez, alternated by Carla) is getting tired of feeling alone during Christmastime. Can Murray and Veronica settle their differences? Will David, Lisa, and Amy realize what they truly want? Can the "Steam Train" mazimize his potential? And will Mrs. Claus ever get the attention she deserves from Santa, or will she ask their elves to keep her warm?

THE VERDICT. Songs for a New World is part-song cycle. The story develops through song-which means there are no spoken dialogues in the play. For most parts, Direk Robbie succeeded in weaving and relaying his story into the songs even though their context was entirely different. The message and theme of the play remain intact. 9 Work Theatrical's Songs for a New World is still an exploration on change and how redemption can be found in the end if you know when to take a stand and when to turn around after hitting a wall, as James Robert Brown said. Direk Robbie made use of projected city landmarks, backgrounds, and other visual aids to help tell the story.


However, the cracks were still evident; the song lyrics still reveal the original intention of the musical. For instance, "On the Deck of a Spanish Sailing Ship, 1492" was presented as Murray's lament over the fall of his business, but its lyrics (about the sinking of a Spanish ship, with the captain as the main "character") betrayed the reinterpretation. But the able cast, some of the best talents in Philippine theater, makes up for these faulty lines. Felix, for instance, demonstrated his vocal and acting chops with some of the play's most rousing songs.


However, Pinky, hands down, got the loudest applause of the night for playing Mrs. Claus. She showed spunk as the often forgotten Mrs. Claus in "Surabaya-Santa," her only solo number in the musical.


For her part, Carla, playful and tragic as the pampered but neglected wife, was in "Just One Step" (her take on "Surabaya-Santa was also well-applauded, but it lacked the world-weariness Marquez exhibited). This shows that the production would have worked without Direk Robbie's story- Pinky, Felix, and Carla were enough to sell the material as a musical-slash-song cycle.


9 Works Theatrical's Songs for a New World is still an engaging production, but you don't really have to follow the "story" to enjoy it; you can appreciate it one song at a time.