The Male Voice tackles violence from a man's point of view 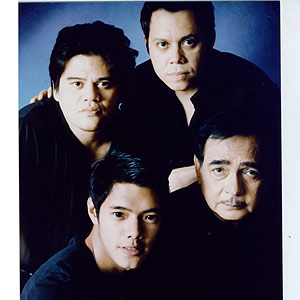 The Male Voice will have a limited run on May 22, 23 and 31 at the RCBC Theater, Makati City. It will be topbilled by (from top, clockwise) Jamie Wilson, Michael Williams, Tommy Abuel and Joaqui Valdes.
The New Voice Company celebrates its 15th anniversary with an original play called The Male Voice (TMV), which is written by NVC associate artistic director Rito Asilo and acclaimed actor Jamie Wilson.

TMV will have a limited run on May 22, 23 and 31 at the RCBC Theater at 8 p.m. (Call 896-5497, or email nvc@pldtdsl.net), and will be followed in August with another original play that will feature the rare pairing of two theatrical icons.

The NVC is known for its provocative and groundbreaking feminist productions such as David Mamet's Oleanna and Diane Shaffer's Sacrilege to Caryl Churchill's Top Girls and Eve Ensler's The Vagina Monologues.

For fifteen years, the New Voice Company, and its founder Monique Wilson have always managed to keep its productions exciting, relevant and dynamic by staging shows that are socially provocative and entertaining.

Acclaimed actors Tommy Abuel, Michael Williams, Jamie Wilson and Joaqui Valdes, last seen together in NVC's acclaimed restaging of Stephen Sondheim's Into The Woods, reunite to breathe life into the play's dramatic, poignant and sometimes hilarious true-to-life stories, inspired from interviews that examine roots of violence in men, spoken by men—uniquely and revealingly from their perspective. The play is an honest, provoking and moving introspective of the rarely spoken issues of men—and why violence, in many obvious and less obvious forms, has been a part of their lives.

The concept of "TMV" was born in 2003, when Eve Ensler decided to include men in her annual "VDay" benefit shows—raising the question of addressing the problem of violence against women by involving men in the understanding and solution process. The series of workshops and interviews with a diverse group of men that followed at the New Voice studio gave birth to a short but highly acclaimed segment of the "VDay" show at the AFP Theater that year—a piece that brought most of the house to tears.

Next month, New Voice explores the theme further by bringing onstage powerful, revealing, moving, and funny stories of men from all walks of life: Artists, students, priests, gay and straight men, illegal Filipino workers abroad, macho dancers, businessmen, male prostitutes, military men, abused children, doctors, fathers and brothers. The stories give insight into their worlds and how they are connected to women.

The play is directed by Rito Asilo, and produced by Rossana Abueva and Monique Wilson, NVC executive director and artistic director, respectively.