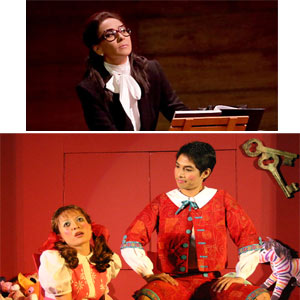 Past productions of the Philippine Opera Company include Master Class starring Cherie Gil (top frame) and The Toy Shop (bottom frame). The theater group marks its 10th anniversary this 2009.
The Philippine Opera Company (POC), an opera company that that regularly stages productions, turns 10 this year. POC looks back at its triumphs and challenges in the past 10 years by restaging its most successful productions, and launching new recordings lined up one after the other from May 2009 to October 2010.

Harana will also tour the Hague and Amsterdam, The Netherlands on June 15 to 22.

Before the year ends, POC will officially launch three of its most promising young crossover performers collectively referred to as the Opera Belles. These young ladies sing beloved classical and semi-classical songs from Opera master Giacomo Puccini to multi-awarded film scorer and arranger Ennio Morricone; from Old School Jazz to most recent Broadway tunes. The Opera Belles are presently recording their debut album, which is also being arranged by De Guzman.

POC also brings back Opera-lite— a delightful mix of light, classic, pop surprises and operatic standards in one refreshingly entertaining concert. The show brings together the stars of Philippine opera at the Teatrino, Promenade, Greenhills Shopping Center on October 9, 16, 17, 23 and 24.

POC is also launching five incredibly talented men who are bringing a fresh, innovative sound to bridge the gap between classical and pop music. Their repertoire contains covers of popular classical songs and themes from the movies, to create a more commercial classical pop crossover sound.
Opera Now, a grand night of opera featuring 30 of the country's top classical performers will be staged in October 2010.

"POC has been growing amidst all the challenges we encounter every year. Mounting opera seasons in 2006 and 2008 were way too expensive, but we survived it. But I guess our biggest achievement so far is the people we have employed here. The opera company has served as a platform for classical singers to perform, a place they can call ‘home,'" says Gutierrez, POC artistic and managing director.

POC is currently representing around 85 classical singers in its pool of talents. Its main office has an extensive audio and video library where resident artist, and students studying classical performance can conduct research.
Moreover, a performance school called The Philippine Opera Center for the Performing Arts has been established by POC. It offers beginners and advanced students, voice, piano, guitar and violin lessons. It also offers group workshops called "Music and Movement" from toddlers to adults. Master classes are also available.