Francis Ong opts to stay in the theater scene 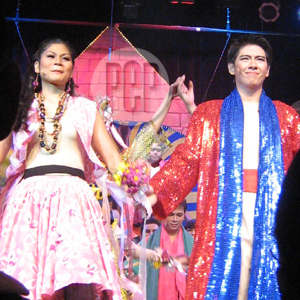 Francis Ong (right) played the title role of the musical play O' Moises, which was produced by the Dulaang Bedista Alumni Production Foundation, Inc. (DBAPF). To his left is Adelle Ibarrientos, who played his wife Ziporah.

While his other batch mates in Star in a Million Season 2 are launching albums, Francis Ong chooses to make a name for himself in the theater arts.

Dubbed as the Boy Next Door during his stint in ABS-CBN's talent competition, Francis was also a weekly challenger in Pinoy Pop Superstar as well as a first runner up in Magic 89.9's Voices 2 for his acapella band, Out of the Box.

After all these achievements, he could have gone mainstream but the 22-year old singer chose a different path. During the March 11 performance of the musical play O' Moises, Francis tells PEP (Philippine Entertainment Portal) his reason for choosing theater over mainstream show business. "Habang lahat sila releasing albums, sabi ko dun sa manager ko, ‘Ayoko muna pumasok into singing,' kasi ayaw ko silang kalabanin so I went into theater. Lahat sila naglalabasan...Si Jimmy Marquez, kakalabas lang ng album. Si Kris Lawrence, may album." Jimmy was the second runner up of the said competition while Kris emerged as the grand winner of that season.

"After Star in a Million, when you get into the final twelve, you have regular mall shows. After we finished the term [doing] mall shows, I [did] theater," recalls Francis. "Parang doon [music industry] na lang sila. Ako, ito na lang ang nook ko."

Dulaang Bedista Alumni Production Foundation, Inc. (DBAPF) produced the musical play O' Moises as a way of sharing the monumental achievements of the great Biblical character for the youth of today. It was written and directed by Vincent M. Tañada, with music provided by Awit Awardee and ABS-CBN's Pipo Cifra.

This is not the first time that Francis has appeared in a stage play. In fact, he played the role of Isagani in Gantimpala Theater Foundation's El Filibusterismo, which was directed by Soxy Topacio.

Francis is currently a Legal Management major in his fourth year at the Ateneo de Manila University.