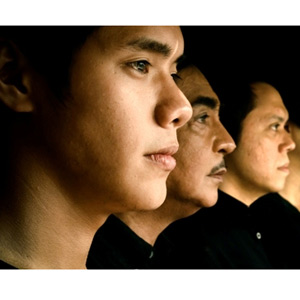 (From left) Joaqui Valdes, Tommy Abuel and Michael Williams topbill the play The Male Voice, which will performance of this play will take place at the RCBC Plaza this Sunday, May 31.

In Alan Bennett's The History Boys, one of his characters asks, "What has truth got to do with anything?" The character, a grammar school teacher tasked to prepare his pupils for the Oxbridge entrance exams, urges his students to make the facts more interesting. "Truth," he says, "is no more an issue in an examination than thirst at a wine-tasting or fashion at a striptease."


But when applied to New Voice Company's The Male Voice, truth has a lot to do with everything. After all, The Male Voice is based on interviews from real people. Much like a male The Vagina Monologues, it succeeds in presenting the different sides of violence committed by and to men. As a result, it gives the viewers a more in-depth understanding of the male psyche. The Male Voice is undeniably Pinoy and remarkably truthful.


SYNOPSIS. A collection of vignettes and monologues, The Male Voice stars Tommy Abuel, Joel Trinidad, Michael Williams, and Joaqui Valdes, with Rem Zamora and Pete Delfin. The interviews were conducted by NVC associate artistic director Rito Asilo, who wrote and directed the play. In an interview with PEP (Philippine Entertainment Portal), Asilo said the material used in the monologues were not altered or changed.


The monologues range from cautionary tales on HIV/AIDS to a story of a life marked by abuse and violence. Some of the monologues include "Si Adonis, Si Dennis," where Valdes plays a probinsyano who succeeds as a macho dancer and a soldier who became shell-shocked after seeing his friend die in the battlefieldm and "Victor/Victoria," where Williams is a gay make-up artist who narrates the abuse he received from his father.


In "Kuya's Picture," Trinidad reminisces about his older brother who is crying in a graduation picture, while Abuel muses on his life behind bars in "Apat Ang Sulok ng Kalayaan ni Bobby."


THE VERDICT. The show runs with sections, alternating the long, more serious monologues and the lighter vignettes. This proves to be refreshing, considering how most of the monologues deal with heavy issues and stories. Trinidad's vignette about the MRT ladies carts and Williams' vignette on shopping are much needed respites from the show's serious monologues. The longer monologues—especially the ones from the later part of the show—are presumably the ones culled from interviews, since they contain much detail compared to the other parts of the show. The four main monologues tackle different issues, all of them touching on different kinds of violence experience by men.


Valdes' "Si Adonis, Si Dennis" is an interesting piece, and the young actor delves into the role competently, despite portraying multiple roles in a single monologue. But Trinidad in "Kuya's Picture" and Williams in "Victor/Victoria" provide the show's most stellar moments. Williams take on the gay make-up artist understandably received the opening night's first and loudest applause. The story he tackled was common and ordinary—the story of a gay boy who got beaten up by his father due to his sexual orientation, among the other details in the monologue, is nothing new—but Williams made it fresh and surprising. Meanwhile, Trinidad's monologue—thanks to material and his commendable performance—is the show's most poignant and achieved piece.


Much credit goes to Direk Rito. The monologues are not perfect—but this may due to the fact that the director wanted to stay as close to the truth as possible.


The director even told PEP that they did not alter or change anything from the interviews, besides names and other minor details. This gives The Male Voice more power. By focusing on the truth rather than garnishing the facts, The Male Voice tells not just the story of select Filipino males; it tells the story of Everyman.


The Male Voice will be staged this Sunday, May 31, at the Carlos P. Romulo Auditorium, RCBC Plaza, Makati City at 8 pm.