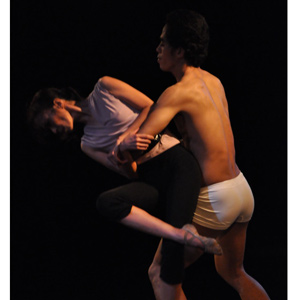 Myra Beltran's Real Time will be presented on July 4, 2009, 8 pm at the Tanghalang Aurelio Tolentino of the Cultural Center of the Philippines.

Contemporary dance artist Myra Beltran will collaborate with award-winning filmmakers to explore the inter-relation of the past, present and future in the creation of choreography and dance. This one-night-only showcase titled Real Time will take place on July 4, 2009, at the Cultural Center of the Philippines as part of the Wifibody Independent Contemporary Dance Festival 4.

"Dance is a technology, a series of events, and a response to events, all happening at the same time," says Beltran. "It is similar to the concept of ‘real-time technology' that people are exposed to in this internet age. From that, the notion of simultaneity takes hold, that the past creates the present and, likewise, the future."

Beltran founded Dance Forum in 1995 and has since been a pioneering figure and proponent of contemporary dance. Her dedication has pushed her initially solitary efforts into more than a decade's body of work and her dance studio has become a performance space that pushes experimental choreography and committed dance artists into new terrain in Philippine contemporary dance.

Real Time features a mini-retrospective of Beltran's works that have been premiered in Dance Forum productions. Highlights include "Becoming," premiered in 1996 for Birdwoman, Pundaquit Festival of the Earth and one of Beltran's signature solos; "Scarred is beautiful," premiered in 2003; and Tra-ver-sing (Pagbabagtas-bagtas), premiered earlier this year.

"Whether 13 years ago or a month ago, the same embedded real-time technology that runs through all these pieces is presented here. Dancers and collaborating artists, all creating the present that is both past and future," she says.


COLLABORATION. Although she is noted for pioneering the solo dance form, Beltran has always been open to working with other artists. "It's why my dance studio is called ‘forum,' because dance is always interaction with others." Notable past collaborators include National Artist for Visual Arts Ben "Bencab" Cabrera; filmmaker Carlos Siguion-Reyna; and violinist Coke Bolipata (in Nostalgia: le grand tango).


HERITAGE. Real Time also aims to expose younger artists and audiences to Beltran's earlier work. "I can share this with them, that the struggle to push for contemporary dance was met by someone before them," she says. "The younger choreographers like Rhosam Prudenciado, Jr. were only in elementary school when I was forging this stuff alone. Any choreographer stands on the shoulders of those who came before. Younger choreographers need to inculcate a sense of history before they can move forward."

Beltran has always supported the work of other contemporary dance artists such as Paul Morales. "I produced Paul's work in 1999, when he straddled theatre, film, and dance. The opportunity for him to work in Dance Forum productions helped to center him as a choreographer. He is now the new artistic director of Ballet Philippines," she says with pride.


"With Real Time, audiences will navigate through this coming together, this breathing and responding. They will experience a sense of history of contemporary dance and, thus, to see its entire range," she says. "They will also see a celebration. Dance is fleeting and we celebrate the passing of time. We celebrate collaboration with artists and friends through the years."

Real Time is presented by Dance Forum with friends and collaborators (Airdance, Asian Composers League Philippines, UP Dance Co., and filmmakers). It runs on July 4, 2009, 8 pm at the Tanghalang Aurelio Tolentino, Cultural Center of the Philippines as part of the Wifibody Independent Contemporary Dance Festival 4. For ticket inquiries, call CCP Box Office at Tel. No. 832-3704.