PEP REVIEW: Fantasticks is a romance tamed by life's realities 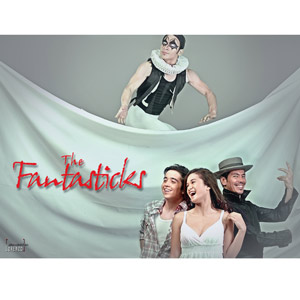 Repertory Philippines will stage The Fantasticks until July 26, 2009 at Greenbelt 1, Makati City.

What happens when you put together two hopelessly romantic teenage lovers and two practical fathers in one musical? Chances are you'll get a disfigured Romeo and Juliet and a whirlwind tour of life's aches and wonders.


For its 72nd season, Repertory Philippines stages its version of The Fansticks, a 1960 musical by Harvey Schmidth and lyrics by Tom Jones, which is loosely based on the play The Romancers written by Edmond Rostand.


The original score of the play is performed by pianists Molinder Cadiz, who has performed for the Singapore Lyric Orchestra; and Jane Bautista, as soloist for the Philippine Philharmonic Orchestra. The score includes timeless classics such as "Try to Remember," "They Were You," and "Soon It's Gonna Rain."

THE PLOT. Knowing that children always do the opposite of what parents tell them to do, two fathers—button-maker Bellomy, and ex-sailor Hucklebee—decide to make their children fall in love by separating them with a wall and a fake family feud. The incurable romantics that they are, sixteen year old Luisa and seventeen year old Matt (PJ Valerio, High School Musical), found the division of their houses terribly romantic and promptly fell in love.


Thrilled by the success of their matchmaking, the two fathers decided to end the fake feud with a staged abduction courtesy of a band of posers led by the Spanish bandit El Gallo (Jake Macapagal, West Side Story). The plan is to make Matt rescue Luisa from an "effective and polite" abduction staged by Henry (Miguel Faustman, Camelot), an ageing actor and his Indian sidekick Mortimer. After the successful of the fake abduction, all romance died down and with the lovers now able to meet freely, they realized each other's flaws and began to fight. Eventually, they went their own ways to experience the world, with all its wonders and pains. Will Matt and Luisa be able to get back together?

THE VERDICT. The Fantasticks is a perfect play for a small theater with an intimate audience since no element goes to waste. Because of the simplicity of the plot, the stage setting was reduced to a ladder, which functions as a wall; a bench, which becomes a stage wing, and two boxes from which actors, the sun, moon, wind, and snow are taken out by the Mime who ushers them into the performance.


PJ Rebullida (Taming of the Shrew, 2005), with his extensive background as a dancer, is a very effective Mime who is an all-round stagehand and an ever transforming character, sometimes being the wall builder, the wall, the wind, the snow. He is ever present and invisible at the same time.


The two fathers, played by Jaime del Mundo (After Aida) as Hucklebee, and Dido de la Paz (Romulus D' Grayt) as Bellomy, are simply darling, with their timing and ability to connect to the audience with delicate humor.


Quite the opposite is Red Concepcion's (Hamlet) Mortimer, the Indian whose extraordinary skill at dying satisfies the Filipinos' love for the slapstick. He more than once brought down the packed house with his elaborate death, which he explains: "It is not the easiest in the business but I'm good at it."


The young Julia Abueva's Luisa, though not lacking in expression, is almost too sweet. It is charming and energetic but it fails to give varying degrees of excitement, all to the point of being monotonous. In the coming performances, the challenge for this promising performer, who at the age of 13, had already sung for heads of state, is to widen her range of expressing vivacity and to draw the audience into her character more.


The Fantasticks is a tale of childish arrogance and romanticism tamed by life's realities. It shows that love is only real when it has survived all the glass shattering and harshness the real world has to offer.