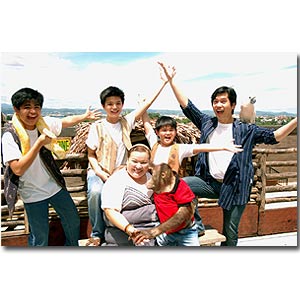 N.O.A.H. (No Ordinary Aquatic Habitat) will be staged at the Meralco Theater from September 4-27, 2009. Watch Trumpets retell the Biblical story of Noah and his famous ark.

Trumpets, the theater company behind the critically acclaimed productions of Joseph The Dreamer, The Lion, The Witch and the Wardrobe and Little Mermaid is back to producing musicals that inspire, teach and entertain the whole family all at the same time.

In N.O.A.H. (No Ordinary Aquatic Habitat), Trumpets retells the classic story of the Biblical patriarch and his famous ark with wit and humor, heart and compassion, hope and joy, and of course, fun!

"Yes, we're back," declares returning Trumpets president Audie Gemora. "We've always work towards producing shows that are of the highest level of quality possible, are geared towards the family, and most importantly, with stories that convey God's message of love. And if ever there's a time we need hope, it's now and, if ever there were a story that best promises that hope, it's Noah."

"We've always tried to put a modern take on what would otherwise be an ‘old' story," explains writer and director Jaime Del Mundo. "Aside from Noah's always relevant theme of hope and second chances, we address three of man's most vital relationships—man with God, man with his fellowmen and man with his environment. Concern for conservation and ecology—these are real concerns here and now."

Originally produced and staged with puppets, this tale of a single man's faith and obedience against seemingly insurmountable odds will now feature a cast of seasoned theater performers. Veteran actor, singer, producer and artist manager Carlo Orosa heads the list as the jovial and staunchly devoted Noah. Acclaimed star of West End's South Pacific Sheila Francisco is the culinary-challenged Mrs. Noah. An ensemble of the Philippines' finest theater performers plus some new exciting talents will join them.

Del Mundo teams up again with The Lion, The Witch and the Wardrobe and Little Mermaid production designer Mio Infante. Together they breathe new life into N.O.A.H. via imaginative staging, a fabulous set and colorful, whimsical costume designs never before seen on Philippine stage. Musical director Rony Fortich's original music is lively, spirited, appealing and at the same time moving and inspiring.