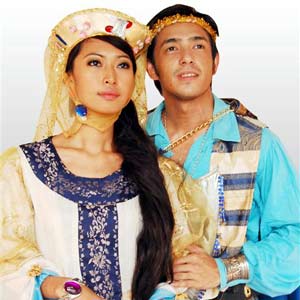 The royals of Albania will be portrayed by Jhen Olivar as Laura and Migui Moreno as Florante. This play directed by Soxie Topacio will be staged by Gantimpala Theater starting August 1, 2009.

Gantimpala Theater opens its thirty second season with Florante at Laura, with Migui Moreno and Jhen Olivar playing the lead characters, under the direction of Soxie Topacio.


Florante at Laura is a Philippine literary classic; an awit made into a play and presented using the theater form of the komedya. The story is about the struggles and love of Florante and Laura of Albania during the war between the Albanians and Moors.


"I am excited and nervous to do the role," says Moreno. "Excited because, this is my first time to work with Gantimpala Theater. When I auditioned, I had no expectations. I was willing to take any part for as long that I'll be given the chance to work with them. Being Florante comes as a really big surprise."


"He is a good son, a romantic, devoted lover, and a warrior," describes Migui of his character. "In fact, being so in love with Laura proved to be his greatest weakness and Adolfo, his nemesis, used this to his advantage."


He continues, "Honestly, I am nervous because the role requires me to present so many emotions, not to mention my lines are really long and we have to deliver it with the right dicho. We even have batalla scenes. Whew! Despite all these, I am doing my best to give life to this character and I hope that the people will be happy with my performance."


Another lucky first timer is Jhen, who happens to be a professional ramp, commercial and fashion model prior to bagging the role.


She shares, "When I auditioned for Gantimpala, I was not expecting anything and I did not even expect that I will pass the audition because it is my first time. To my surprise I got the role of Laura, and it's not just a simple role, it's a lead role. I will play Laura from the heart and I'm really positive about the outcome."


"I am also happy that the people from Gantimpala are very considerate and friendly. Every one is approachable, from our director down to the staff. And every rehearsal day is a learning experience and I am very much inspired to be surrounded by dedicated and disciplined theater artists," adds Jhen.


Tony Espejo, artistic director states, "Beyond the romantic story between Florante and Laura, Aladin and Flerida, Balagtas' awit is a well-disguised commentary on the ills of the society during the Spanish regime. It may be situated in the fictional kingdom of Albania but the conditions it depicts were realities taking place in the Philippines during its years of struggle for freedom. Despite the freedom that we experience now, the ills are still around and sadly, continue to escalate. We hope the eyes and minds of the young will be opened with regard to these realities. Through this play, we hope that they become more vigilant in doing their share to make our nation great again."