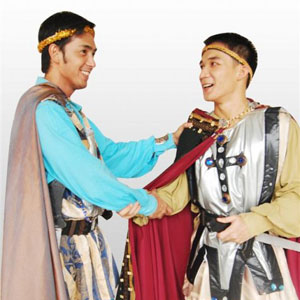 Gantimpala Theater's 32nd season opener is the much revered awit Florante at Laura, under the direction of Soxie Topacio. In this period play, Alfred Urieta portrays Menandro, the loyal best friend of the Albanian prince.

For the past seven years, Urieta has been part of Tony Espejo's drama company. He started with taong bayan roles prior to getting "speaking parts" that includes Bugan in the Aliw Awards 2005 Non Musical Production The God Stealer, Sergeant Tirona in Bombita, one of the revival plays presented during the 1st Pearl Theater Festival, and as Basilio, in El Filibusterismo, his most favorite role and biggest acting break.

"What attracted me to do theater is the fact that it allows me to explore the different facets of my personality, and do the things I like which is primarily acting, then production work," begins Alfred. "There is a whole process of creation when you are assigned to a role, it's almost like you conceive it from your mind, and then you give it life and emotions. I enjoy doing theater stuff and I don't mind whether I do a major or minor character."

Being Menandro, the best friend and trustworthy comrade of Florante is a part that Urieta takes pride in doing and he is very much aware that this is not a "small" part.

"When I found out that I'm doing it, my first reaction was, ‘Oh? Menandro, cool!' I can't help but wonder why, at first," he relates. "When my apprehensions died down, what stuck in my mind is that I have to give my best. As an actor, I must give whatever my director expects from me. Though this role has been performed before, people can expect a big difference with my portrayal."

"He is a very stimulating director," reveals Alfred when asked about Soxie Topacio. This marks the third time that they have worked together. "He gives you simple notes after every rehearsal. The subtext of those notes is actually, you have to give more, you have to do more. With him, you can do whatever you want, and then he'll give his comments if he thinks you're going over board or if what you're giving is not enough."

How is Migui Moreno as Florante? "He is doing well," he avers. "He is also working hard for his role. We are helping each other to establish rapport since we play best friends. We have to jive and that must be seen and translated on stage."

He adds, "You see, if you read the awit, we are best friends since our days as student in Athens. We grew up together. We fight as a tandem in the same batalla and we do it because we love our home country, Albania. Personally, Migui and I talk a lot, share jokes, and help each other out in our scenes."

As one of the senior apprentices of Gantimpala Theater's Actors' Company, he appreciates the fine comments given to him by some of the senior members with regard to his acting prowess.

"Wow! That's a compliment," he reacts. "With every role that they give me, I always worked hard. I think, the company noticed my commitment to do well in acting. So, when I finally got the chance to get a tough role (Basilio in El Filibusterimo), I gave it my best and luckily, nagtuloy-tuloy na ang magagandang characters. Frankly speaking, any actor, especially someone like me who is still a relative newbie, their confidence in me and my capabilities is very inspiring. Maganda pala yung ginagawa ko, and because of their vote of confidence, I refuse to be complacent. I will continue to learn, give my best and be professional, since that is what is expected of me."

What can the audiences expect from this season's Florante at Laura? "I think they will have a better appreciation and understanding of this literary masterpiece by Francisco Balagtas. They will feel definitely feel the actors. Direk Soxie and our assistant director, Roeder Camañag is working double time to ensure that we will give every one a good show. Makikita nila na this is Gantimpala Theater, and that every one will be getting their money's worth."

In the nearest uture, the other roles he wishes to do for Gantimpala are Adolfo or Aladin, Elias in Kanser (Noli Me Tangere), Don Juan in Ibong Adarna.

Aside from acting, Urieta also does stage management work. He occasionally appears on TV. He is also a swimming instructor.

He ends the interview by saying, "I hope that people will have a wonderful time when they watch Florante at Laura. This is a theater experience that you will not forget. Aside from the romantic love story of the two main characters, our company presents it as a komedya and I am sure, the audiences will remember and enjoy the marches and grand batalla. I say peace to every one!"