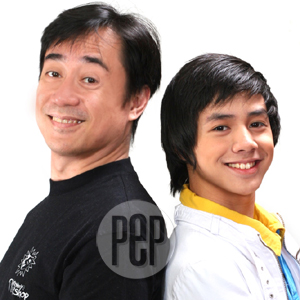 Audie Gemora (left) has been training talented young Filipinos such as Sam Concepcion (right) to excel in the theater arts, allowing them to penetrate the mainstream music industry.

This summer, Trumpets expands its performing arts workshops to the Podium, in addition to its workshops at Shangri-La Plaza Mall. Acting master class and personality development classes have been added to the hot list of Trumpets Playshop courses that will entice any kid, teen or young adult alike to stay in the metro during the hot summer months. Trumpets summer workshops run from April 2 to June 2.

"It's been pure joy to pass on our years of experience in the performing arts to young learners summer after summer. Seeing Christian, Sam, Reymond, the Playshop Kids and the rest of our graduates making it big outside Trumpets is truly exhilarating for their respective teachers. It's like it has become our ‘passion to pass it on.' We challenge everyone who's been part of Trumpets to pass on the torch in his/her own personal means and ways," says workshop consultant Audie Gemora.