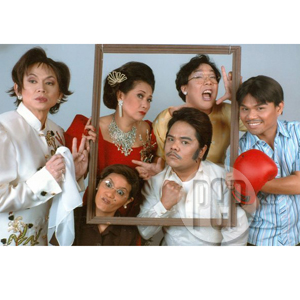 Rock da Vote, the live political comedy theatre event that has made hilarious fun out of the insanity of every election year, returns for its newest edition this 2007 with an important new partner: ABS-CBN's Sunday variety show ASAP.

Considering that these are the cream of the crop of today's comedians, spectators can expect a lot of impressions and caricatures of the people most recently involved in issues today. Jon Santos will bring on his unforgettable impressions of Ate Vi, Kuringning Sanchez, and Madam Melding. Candy Pangilinan will do Presidentita Gloring and Miriam Defensive Santiagot. John Lapus gets under the skin of such personalities as Madame Auring, Tita Cory, and Kris. Hot new standup star Pooh will, of course, make light of Manny Pacquiao's current political ambitions. Chokoleit gets to show the funny side of Sherap Espada and Bro. Mike. Last but not the least, Tessie Tomas revisits her legendary "Meldita" character and her new favorite Mel Sakit Tiyanko for several sketches.

On its second decade, with new editions created for every election year, the Philippines' best-known live comedy show Rock da Voteis showing no signs of growing older because it gets its comedy fresh from the headlines. What with family drama, new Comelec rules, and controversial new figures making their way into the political arena, expect to see cutting-edge political satire yet again from the country's top standup comedians. This time, however, it's set to be even bigger, with ABS-CBN's trademark polish behind the entire event.

Tickets are available at all TicketWorld outlets, as well as through the TicketWorld hotline 891-9999.