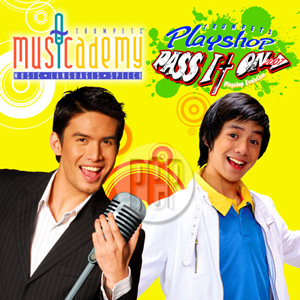 Aspiring thespians can enroll in Trumpets Playshop and Musicademy to improve skills in the theater arts as well as in other fields.

Trumpets Playshop and Musicademy extend enrollment until April 14 to give way to the observance of Lent. For this summer, acting master class and personality development courses are added to the list of workshops to be conducted at The Podium, Shangri-La Plaza Mall, and Alabang Town Center.

Christian joined Trumpets Playshop's advance musical theater class fresh from his undergraduate studies at the University of Philippines. A year later, he came back to the workshops as assistant teacher to stage actor Meynard Penalosa. In 2004, Christian competed in ABS-CBN's first reality-TV talent search Star In A Million. He later joined STAGES and inked a recording deal with Warner Music Philippines. His first hit single "The Way You Look At Me" made it really big not only in the Philippines, but in Indonesia, Thailand, Malaysia and Singapore. He continues on with his winning streak with hit albums, concerts around the Asian region, Middle East and the US, regular TV shows and movie projects.

Sam enrolled with Trumpets Playshop's advance musical theater class when he was just nine years old. He later took up street dancing classes. Soon after, he was competing in ABS-CBN's first season of Little Big Star, where he grabbed the Brightest Star title. Also managed by STAGES, Sam has been part of various ABS-CBN soaps like Super Inggo and Your Song. His latest soap is Walang Kapalit where he plays the young Piolo Pascual. He is currently dubbing the voice of Yukio Tanakar for Japanese anime, Beck to be shown over Hero Channel.

Reymond Sajor took up musical theater class with Trumpets Playshop before flying to Hamilton, Canada in 2003. He competed at the 1st Hamilton Talent Hunt and won the grand prize. He then went back to Manila and played the lead role of Prince Christian in Trumpets' production of Little Mermaid. He auditioned for the first-ever Philippine Idol and secured himself a spot in the Top 12. Reymond, who very recently joined STAGES, will compete at the World Championships of Performing Arts (WCOPA) in Hollywood by July.

Trumpets Playshop and Musicademy this summer run from April 2 to June 2.