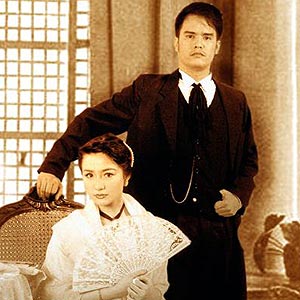 The second installment of Gantimpala Theater's Four Classics, Kanser (Noli Me Tangere) penned by award-winning playwright Jomar Fleras, under the direction of Adriana Agcaoili, brings back on stage the life of the European educated Don Crisostomo Ibarra and his lady love Maria Clara, and the many interesting and intriguing characters of San Diego.


Director Adriana Agcaoili says, "The Noli Me Tangere, Dr. Jose Rizal's first novelis the basis for Fleras' award-winning play, Kanser. As a historical record, his novel is a powerful and very real testament that Rizal--and all the revolutionary Eliases, the victimized Sisas and Crispins, and the broken idealists like Ibarra--made for our motherland. As live theater, Fleras' play makes for an entertaining two hours of watching and what is wonderful about it is that, it will really allow you to ponder on the many issues that it presents."


"This is my first time to play the role of Crisostomo Ibarra and I must admit that this is a very challenging character," says Jao Mapa. "Ibarra is an idealist, a young man educated from Europe who went home to spend his life with his beloved Maria Clara. When he comes home to San Diego, he sees that Filipinos were being oppressed by the Spaniards and even he, an ilustrado also experienced the oppression. As an actor, people must see my transformation from a naïve young man to a hurting and hunted enemy of the government."


He adds, "I am very thankful to Gantimpala Theater for giving me the opportunity once more to work with them. I appreciate the discipline, hard work and the high level of professionalism of all the people who are part of this production. I just hope that I deliver what they expect from me and that our audiences will enjoy and learn from our play."