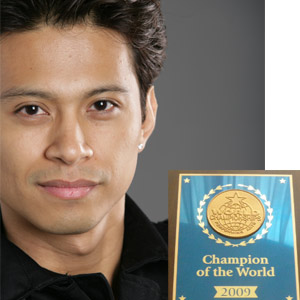 He emerged as the World Champion for Male - Acting Contemporary in the prestigious annual talent battle. He also bagged medals for the following categories: Gold - Male Acting Contemporary, Gold - Male Vocal Gospel, Silver - Male Acting Dramatic, Silver - Male Variety (Martial Arts), and Bronze - Male Vocal Country & Western. He also received an Industry Award for Most Requested Go-Sees, which is awarded to contestants who had agents, directors, and producers request to privately see them, after watching their performances.


Not bad for a first-timer in WCOPA. Guy made it three for three, meaning he bagged medals and recognition in all the three categories that he entered in--a first for the Philippine delegation since joining WCOPA in 2005.

Most recently, Guy also got a scholarship for the prestigious New York Conservatory of Dramatic Arts (NYCDA). Just how tough and rare is it for one to get past the auditions and then admitted into the program? Over 5,000 aspirants audition for the institution every year, but only 180 are accepted. And it should be worthy to note that this may be the first time a Filipino citizen was granted an NYCDA scholarship.


"In that sense I feel that I did my country good. I feel very honored and appreciated that my talent got recognized. For me to be given a scholarship, knowing that it's not easy to make it, makes me feel even better," Guy shares. "Of course, this will add prestige to my career because I will learn skills that are world-class, hence increasing my chances of making my dreams come true."


His win in WCOPA and acceptance to NYCDA have confirmed all his beliefs in his dreams. "They're a validation for me. With all these recognition, I feel I'm in the right path to my dreams," says a determined Guy, who makes sure he brings home something whenever he goes to and competes in any battle.

GUY WHO? Born in Sta. Cruz, Manila, Philippines, Guy Lockwood relocated to Hong Kong at the age of seven and grew up there, when his mother married his stepfather, who later adopted him. He earned a Bachelor of Business degree with double major in Marketing & Management at the Auckland University of Technology in New Zealand. Five months after his graduation, Guy became a middle manager for an international company. He then got, in his words, "a great job offer" as a regional marketing manager in Monte Carlo in Monaco, where his employer "made me live in a resort and fly business class to different places." Then came a realization.


So he quit that luxurious job, went back to New Zealand, and got another job, which he used to augment for acting classes he took up to become a professional actor. Of course, he got to utilize his having been a marketing guy as he started in New Zealand television. He says: "Marketing is like acting, because you present. You need to be dynamic like an actor."


Guy's television exposure include a guest role as a station foreman in the Power Rangers: Dino Thunder Episode 1,224: A Ranger Exclusive (2004) and a featured role as Mr. Gilmore in Shortland Street (2003), both in New Zealand; a performance in RJTV Sweet Talks (2006) and as a video jockey (VJ) in (2005), both in the Philippines.

COMING BACK TO HIS ROOTS. It was his mother, Marcelina, who advised him to try acting in the Philippines. He came back to the country in 2005, courtesy of hairstyling guru Tony Galvez.

TARGETING TINSELTOWN. "What I've achieved is not only for me, but also for my country, the Philippines," asserts Guy, who plans to use it to catapult his local acting career. "For sure, my NYCDA scholarship can only bring positive outcomes career-wise. I look forward to living and studying in New York."

But his ultimate career goal: become known in Hollywood. With his passion, hard work, focus and determination to always be the best in his craft, that dream is never too far for Guy Lockwood.


"I am a Filipino and I can act," he answers when asked what he thought was his edge in succeeding in this dream. "I'll make the Philippines proud by becoming the first Asian guy--a Filipino--who can act and be known for it all over the world!"


Guy Lockwood is managed by Marie Gutierrez of Alegra Music.