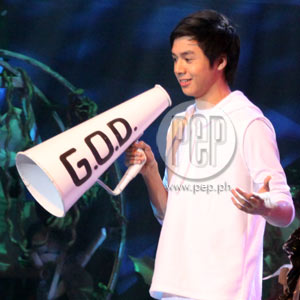 "I honestly thought, it's not easy to be God! Mahirap po talaga to be gentle and firm and to nurture at yourself at the same time and very caring and loving," says Sam Concepcion about playing this role in N.O.A.H. (No Ordinary Aquatic Habitat. This musical is being staged at the Meralco Theater until September 27.


Aniya, "It's my first performance with an audience. May alternate po ako rito. Si Fred Lo and he's one of the choruses po kanina."


"'Yun nga po, if you don't know, this production N.O.A.H. was actually called before as Mr. Noah's Big Boat. And it was the theater play with puppet. I was the voice of the little kid then, ‘yung youngest ni Noah and Mr. Noah was Gary Valenciano. And Mrs. Noah was Bituin Escalante.


"It's the same story, pero, iniba na po siyang talaga for big theater play and actual people to play. May idea na po ako, pero, with the narrator and God, may idea na rin po ako and when I was in the process of learning the character, I honestly thought, it's not easy to be God! Mahirap po talaga to be gentle and firm and to nurture at yourself at the same time and very caring and loving.


"No man could do it," natatawang sabi niya.


"It's something new for the audience to see that you know, God can relate to you. It can be cool. So, ‘yun..."


He was working with his manager, Carlo who was also good on his role as Noah. How was it?


"Actually, it's been years since we last worked together. The last one po was in 2002, The Lion, The Witch and The Wardrobe. You know, I almost forgot na nga how it is to be with Tito Carlo on stage, but it's a pleasant experience having Tito Carlo on stage.


"He was very funny and he always come up with new things."


"Yes, well, given the fact that this is where I really started, dapat we look back to where we started and you know, we always come back to that. It's a great feeling that you always go back home."


Pero magkaganunman, he has nothing but contentment naman daw.


"Of course, of course...God has blessed me po talaga with so much more than I even could imagine or ask for. Just the feeling what you we're able to do and what you enjoy doing and being able to share it with people. Nakikita mo that you enjoy it as well. It's very fulfilling for me.


"For anyone naman po, e. You just learn how to count your blessing in everyway. And you'll be surprise to see na ang dami pala."


So far, his last appearance on television was on the ABS-CBN show I Love Betty La Fea, pero okay lang daw sa kanya dahil nakakapag-concentrate siya sa musical nila which will run from September 4 to September 27 at Meralco Theater.


"Mahirap din po kasi ang acting and singing at the same time. Mahirap din pong kumanta kapag puyat. So, we'll see po. Kasi, I'd like to explore in my musicality as an artist. Gusto ko po kasi na mag-grown pa as an artist. Someday also to be able to make songs not just for me but also for other people."