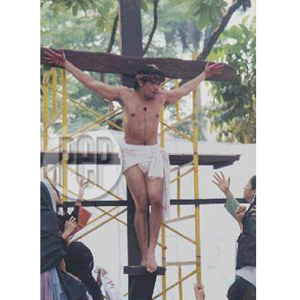 Jesus (played by Russel Sorillo) is nailed to the cross in one of the scenes of Martir sa Golgota, a passion play annually produced by Tanghalang Sta. Ana. This project is spearheaded and directed by Lou Veloso, comedy actor and former Sta Ana Councilor. This year, directorial work for Martir sa Golgota is taken over by Mr. Joseph Domingo and Abel Napuran.

Martir Sa Golgota, Tanghalang Sta.Ana's depiction of the passion and crucifixion of Jesus Christ, sticks to tradition—something that they've been doing for the past 18 years. Tanghalang Sta. Ana's version adheres to the Pinoy format of the Senakulo, with subliminal implications on the coming May elections.

This Senakulo will be shown on Holy Wednesday (April 4) at Plaza Hugo, Sta. Ana (near the church); Maundy Thursday (April 5) at the Mabolo Basketball Court, Obesis St., Pandacan; and on Good Friday (April 6) at J. Posadas, Punta, Sta. Ana at 7:30 p.m.

For comedy actor Lou Veloso, the birth of Martir Sa Golgota and of the Tanghalang Sta. Ana came as a form of a personal Calvary 18 years ago. These two projects were a product of a persistent dream to put up a community theater in his area.

Veloso's dream of nurturing community theater in Sta. Ana leaped forward when he was first elected as a councilor in 1995. After a few years, Veloso was able to acquire a small portion in Plaza Hugo Sta. Ana, which later became the Sta. Ana Arts Center. "It was a nearly dilapidated bodega which we all cleaned with our own bare hands. We all helped one another. My dream to have a legitimate venue was finally realized," relates the former councilor of the sixth district of Manila.

He observes that the community theater serves as a good instrument where the youth can have something productive to keep them busy, thereby keeping them away from drugs and illegal activities not uncommon from depressed areas. "I guess this success is one of the reasons why we're staging Martir sa Golgota," says Veloso. "For us working in this play, this serves as our annual religious offering."