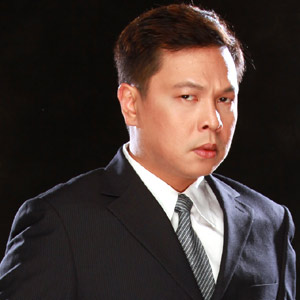 Jett Pangan is set to do his tenth play this September. The vocalist of The Dawn is cast as Adult Male Figure in Atlantis Productions' Spring Awakening. This rock musical will run from September 25-October 18, 2009 at the RCBC Plaza, Makati City.

Jett Pangan makes sure he makes a foray into theater at least once a year. He has been bitten by the acting bug ever since he became lead in Jesus Christ Superstar way back in 2000 where he played the role of Pontius Pilate.

"When you start a play, you are new again. Sure you have those things to your credit but you are only good as your last play but at the same time, you are a new actor again.

"I don't think that ten plays will mark me as a veteran. But I've done my time in musical theater. It's a blessing because not a lot of rock musicians are able to do this and have this door made open for them," he told PEP (Philippine Entertainment Portal) as the cast took a break from their morning rehearsals earlier today, September 15.

BEING A VOCALIST VERSUS BEING A THESPIAN. Jett admits that the theater training has helped him become more disciplined. He points out that he has changed by leaps and bounds from the first time he stepped onstage to perform a role.

"Iba yung you're doing this day in and day out. It keeps you on your toes. You're focused. May alertness, overall instinctiveness. It molds you," he said.

"It is so different because it gives me a sense of balance. Being in a rock band, that's my comfort zone. You know how it is being in a band na walang oras na sinusunod, you play when you get there. Sometimes you wait."

Jett appreciates what theater has done for him, "Ang ganda ng theater because it's like going to the office. You have to be there by 11 am and end at 5 pm. The time is portioned very strictly. I like that because it sticks to my body clock. It gives me a sort of discipline internally and externally.

"Yung sense of balance onstage is there, the voice clarity. I don't have to do much but to project. Stuff like that I get from theater but without sounding at the risk of being theatrical in a rock band. But the confidence and how you project, I get that from musical theater," he said.

But Jett admits that it was a little difficult juggling his duties for the The Dawn and his rehearsals for the musical. The Dawn recently released their album, Sound The Alarm. Recording and mixing for the album came at around July while rehearsals for Spring Awakening started around August.

(Click HERE to read more about The Dawn's new album)

"It is always a struggle to balance things. First I have to nicely ask my band mates and the management if I could do the play. They would happily give way. We lose gigs in the process but our weekends are still intact. We can't do out-of-town gigs for the duration of the play lang.

"Chari Arespacochaga [Spring Awakening director] kept our Saturdays free. I could fly to somewhere pwede but as long as I have to be back on Sunday. But for purposes of doing this, we minimized gigs na rin. We still kept our schedules in Manila at least."

But being a rock star and having essayed roles like Riff Raff in The Rocky Horror Show and Jimmy Early in The Dreamgirls didn't mean that Jett would have automatically landed the role of Male Adult Figure in Spring Awakening.

Jett narrated that he had to do a video audition last December 2008 just like everyone else in the cast.

"The great thing about this is I don't sing except in the last song. It's just pure acting which I find very, very cool. When Chari told me, ‘I'm in.' It is so ironic na it's a rock musical and I don't sing. I love it. It's kind of surreal for me. It's an acting piece. Parang supporting role ito to the kids. They do most of the singing. Iba siya for me," Jett ended.


Spring Awakening Manila will be staged by Atlantis Productions, which is celebrating its 10th anniversary.