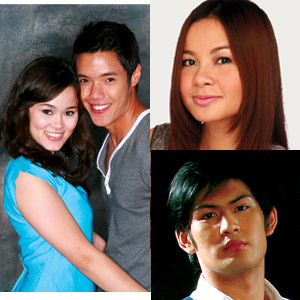 Kelly Lati and Joaquin Valdes (left frame) portray the lovers Wendla and Melchior in Spring Awakening. Sitti (upper right frame) is cast as a sexually abused teenager while Miguel Mendoza is plays a young boy who fantasizes about his teacher. This rock musical will run from September 25 to October 18, 2009 at the Carlos P. Romulo Auditorium, RCBC Plaza, Makati City.

At this day and age, with information easily accessible with a simple click of button, you would assume that a 14-year-old would know where babies come from. But in 1891 Germany, this isn't the case. Mothers tell their children that babies come from storks and authority figures restrict the talk about the birds and the bees.

This is how Atlantis Productions' staging of Spring Awakening begins. With book and lyrics written by Steven Sater and music by '90s pop star Duncan Sheik, Spring Awakening pushed the limits of American musical theater by defying its conventions.


Directed by Chari Arespacochaga, Spring Awakening boasts of a young cast consisting of some of the hottest names in the local theater and music industries. It will also introduce to the stage two familiar names in the music scene: Sitti Navarro and Miguel Mendoza.


It starts with Wendla Bergman (played by Kelly Lati) asking her mother where babies come from. Instead of the usual ‘the birds and the bees" talk, her mother said, "In order for a woman to conceive a child... she must, in her own personal way, love her husband. Love him as she can love only him. She must love with her whole heart."


And there begins Wendla and her friends' journey towards self-discovery and sexual exploration. Melchior Gabor (Joaquin Valdes) succumbs to his "first emotion of manhood" with Wendla and this leads to her become an unwed mother. Due to the show's explicit content, parental discretion is advised.

DIFFICULT ROLE. Sitti will play the role of Martha, a teenager sexually and physical abused by her father. Her interest in theater started only started a few years ago, when she was beginning her career as a bossa nova singer, but it soon developed in a feverish desire to try her mettle as a theater actress.


"Kasi when I started as a singer, doon ako sobrang na-expose to a lot of different types of music and a lot of different art forms. I got hooked into a theater mga three years na. I've been watching a lot of their [Atlantis] productions and other productions as well. And I've always wanted to be a part of it. It's really one of my dreams talaga," she said.


Her dream even became more pronounced when she played the role of Mary Walter in the one-night restaging of Katy! The Musical during the Metro Manila Film Festival last year. "Ever since that I've telling everyone, I've been telling Tito Boy [Abunda] na I really want to do this. I want to do theater. I'm willing to sacrifice anything to be a part of a theater production."


It would seem like the musical and the role of Martha would not match Sitti's singing style; Spring Awakening's musical numbers are designed to be an internal rock concert separate from the play. However, Sitti relishes the opportunity to go out of character.


"A lot of the songs here are edgy and angsty. Sobrang na-enjoy ko lang talaga. The emotion required of all the songs, they are emotions that I don't get to feel everyday. My life is kinda very sheltered, very planned out. Now, when I get to sing songs like "Totally F***ed," "Mama Who Bore Me," pinagdaanan kasi nating lahat yung mga kanta dito e, naaalala ko silang lahat," she said.


Former Philippine Idol and Pinoy Dream Academy contestant Miguel thinks Spring Awakening is a musical his fans can embrace. "I think it's good din, kasi it's not that theater-like. Contemporary pa rin s'ya. And I'm sure makakarelate pa rin yung mga tao," he said. "I'm also showing a different side of me. They're used to me singing ballads, now I'll be singing rock."

Miguel is playing Georg, a teenage boy who has fantasies about his piano teacher, played by Cheska Iñigo.


"My friends told me to audition for it, so I said why not. It will also be good for business. There'll be a reason for me to sell tickets because I'm also part of the show."


RELEVANT MATERIAL. According to Joaquin Valdes, who plays the male lead Melchior, the issues raised in Spring Awakening are still relevant today.


"I guess it's not the manner of knowing about sex. It's about the conversations and relationship you have with your parents and the other figures of authorities. That's the one that matters. I found out about sex from my classmates, but it would have been better if I found it out from my parents. That would establish our relationship. That would make my walk smarter and more meaningful rather than just waste it away," he said.


Melchior is described as a rebel by his friends due to his unorthodox beliefs ("he's such a radical," one of the characters says of him). Yet he is the only who has the answers the other characters are looking for. This is exactly the reason why Joaquin specifically auditioned for the role of Melchior.


"When I was looking into the material, I fell in love with that character in particular [Melchior]. And I found a lot of similarities with me noong bata rin ako. Medyo rebelde ako dati. Not a rebel without a cause," Joaquin said. Nung high school, sumasagot ako sa teachers. I was a smart one pero medyo may pagka-smart aleck ako like Melchior. I really connected with the guy."


Although the dialogue is heavy with cursing, among other mature content, Joaquin cautioned parents who would bring their children to see the musical not to censor the material. "If you're gonna bring your kid to watch Spring Awakening with the expectation to take him out in that scene, then it defeats the experience. That's exactly what the show is trying to say. It's exactly what it's telling the parents: your kids have questions. And if you're afraid to answer, then this is the consequence of it," he pointed out.

Spring Awakening is the second offering of Atlantis Productions for its tenth anniversary. It will run from September 25 to October 18, 2009 at the Carlos P. Romulo Auditorium, RCBC Plaza, Makati City.