Believe The Pop Musical to be held at the Music Museum, Oct 6 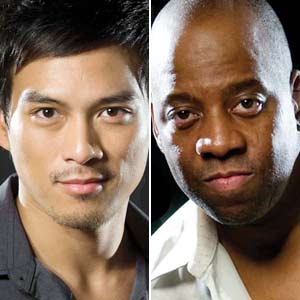 Star Magic talent Guji Lorenzana (left) will perform with R&B singer-songwriter Keith Martin (right) in Believe, The Pop Musical. It will have its Manila run at the Music Museum on October 6, 2009.

After its successful and highly-acclaimed staging in Cebu City last July, Believe, The Pop Musical will have its Manila run at the Music Museum on October 6, at 8 PM.


The show combines the drama of theatre with the energy of a musical concert. Conceptualized and directed by Bill Ramos and Marq Dollentes, Believe is a story of the transforming power of love and the miracles it can do. It promises to inspire, uplift, heal and empower through songs of faith, hope, joy and courage.


The actors portray characters facing common challenging human issues—one's own mortality, loss of loved ones, identity, self-love and self-esteem. In the story, the "Spirit" comes in whimsical guises and uses people, relationships, and situations as a call to always choose to see love in a world of fear.


Among the featured pop songs in this stage play-cum-musical concert are "Bring Me To Life," by Evanesence, "I'm Your Angel," by Celine Dion and R. Kelly, "She's Out of My Life," by Michael Jackson, "No Matter What," by Boyzone, "Reflections and Voice Within," by Christina Aguilera and "Because of You," by Keith Martin, to name a few. These songs were given a fresh and new arrangement by music geniuses Bob Aves, Naldy Rodriguez, Bond Samson, Obette del Rosario and Keith Martin.


Another highlight of the show are the specially made video support directed by Will Fredo, the director of the digital indie film Compound and Sa Pagdapo ng Mariposa, and filmmaker Mark Espina. Set design is by Firma Manila, costumes by fashion designer Jun Escario and hair and make up by Ruel Papa. Official media partner is MTV Philippines.


The show is a production ofOne World of Music and Light and presented by The Philippine Society of Medical Oncology. It alsoserves as a fundraiser and the opening activity of the annual convention of the Cancer and Health Awareness Outreach Program.


See how the bondage of fear is broken and the gift of faith is realized when love touches the heart. Experience Believe.