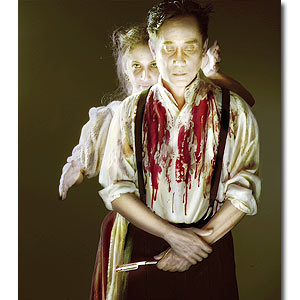 Audie Gemora and Menchu Lauchengco-Yulo (both in photo) will star in Repertory Philippines' Sweeney Todd. It will be performed at Onstage, Greenbelt 1, Makati City starting November 13, 2009.

Sondheim (Into The Woods, Sunday In The Park With George) has won seven Tony Awards and a special Tony Award for Lifetime Achievement in Theatre. He is also a multiple Grammy Award recipient and a Pulitzer Prize winner.

The composer's signature dissonant style in melody, and the chilling and exciting storyline make Sweeney Todd a memorable theatre experience. The play revolves around a murderous barber who wants to exact revenge for his misfortunes in life. His accomplice, Mrs. Lovett, owns a meat pie shop and uses the bodies of Sweeney Todd's victims for her own welfare.


This is REP's third incarnation of the musical thriller. The company staged Sweeney Todd in 1982 and in the 1990s.

In the title role of Sweeney is Audie Gemora. Touted as the King of Philippine Musical Theatre, he has appeared in over 40 plays, ranging from Broadway/West End to original Filipino works—playing major roles in Pippin, Evita, West Side Story, Les Miserables, Man of La Mancha, Fili and Noli for the Cultural Center of the Philippines (CCP) Tanghalang Pilipino, Ang Paglalakbay ni Radiya Managandiri for The Philippine Educational Theater Association (PETA), among others.

The role of Mrs. Lovett, the unfortunate neighbor who is infatuated with Sweeney, is taken on by Menchu Lauchengco-Yulo. Two-time Aliw Best Actress, Menchu began her acting career with REP in Fiddler On The Roof in 1978. And from there, she played important roles in West Side Story, A Chorus Line, Les Miserables, Camelot, King And I, Evita, Kiss of the Spider Woman to name a few. She recently made her directorial debut with the highly successful revival of West Side Story featuring Christian Bautista, Karylle and Joanna Ampil.

Robbie Guevarra plays the Beadle. He is another main player in local theatre, having appeared in over 70 productions here and abroad. He has directed REP's Romance, Romance and A Christmas Carol, and Blue Repertory's "Batboy."

Two newcomers to the REP stage are Lena Mckenzie and Franco Laurel playing Johanna and Anthony, respectively. Lena is a soprano who has performed in Noli Me Tangere for CCP Tanghalang Pilipino. She is currently a voice major at the University of the Philippines (UP). Franco, on the other hand, began performing in musicals in 1999 with Rama and Sita, where he played Rama's younger brother. In 2004, he received the Aliw Award Best Actor for his role as Ugly in Trumpets' Honk, the Ugly Duckling. And in 2008, he was Jose Rizal in Isang Panaginip Na Fili for Dulaang UP.

Baby Barredo co-directs with Michael Williams. Ms. Barredo has come full circle in Sweeney Todd as she was Mrs. Lovett in the 1982 production. The other members of the Artistic and Production staff include Gino Gonzales for set design, John Batalla for lighting design, and Mio Infante for costume design. Gerard Salonga conducts the FILharmoniKA orchestra.