PEP REVIEW: Spring Awakening is a risk that paid off 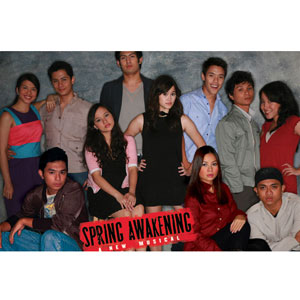 The Manila production of Spring Awakening stars (first row, from left) Inno Martin as Otto, Ava Santos as Anna, Kelly Lati as Wendla, Sitti Navarro as Martha, and Nar Cabico as Ernst. Completing the cast of this musical staged by Atlantis Productions are (second row, from left) Yanah Laurel as Thea, JC Santos as Hanschen, Miguel Mendoza as Georg, Joaquin Valdes as Melchior, Nicco Manalo as Moritz, Bea Garcia as Ilse. This edgy and provocative musical is bein

Director Chari Arespacochaga has said Spring Awakening requires a brave and generous cast, a group of actors courageous enough to deal with what the musical requires of them. I realized how true this was during the September 23 preview performance of Atlantis Productions' staging of the hit Broadway musical.


But that's the beauty of Spring Awakening. Atlantis' staging of the Tony Award-winning musical is indeed a risk, and thanks to its talented and fearless motley of young actors, it is a risk that paid off.


Set in Germany in 1891, Spring Awakening, based on German playwright Frank Wedekind's play of the same name, begins with Wendla (Kelly Lati), who just turned 14, asking her mother how babies are made. She's too old to believe the stork, she said. Unable to answer her directly, her mother (Cheska Iñigo, who plays all of the adult female characters) instead says that a woman conceives when she loves her husband the way only she can. It turns out, her friends Anna (Ava Santos), Thea (Yanah Laurel), and Martha (bossa nova singer Sitti Navarro) are just as curious.


Elsewhere, the boys are experiencing sexual stirrings of their own, especially the troubled Moritz (Nicco Manalo). Melchior (Joaquin Valdes) is the sole child who has the answers to the questions their adults around them (especially not their parents and school authorities) dare not answer. When Melchior and Wendla, they experience an unusual yearning that they have never felt before—and there starts the tragedy.


It is easy to become disconcerted with Spring Awakening, and not only because of the material. For one, the songs function more like internal monologues rather than actual dialogues. When the characters perform a song, they are detached from the musical's setting; instead, they are singing like every teenager who has felt wronged by adult authorities (as in "Totally F***ed," the rousing number that had everyone in the audience laughing and clapping) or has felt the sheer exhilaration of having a teenage crush (as in "My Junk"). These numbers require the actors to give it their all.


The set, too, does not resemble anything you would expect from what should be a period piece. But it managed to capture what Spring Awakening is trying to convey.


It's obvious that the cast's talent and energy set the tone of Spring Awakening. The musical's key actors managed to provide the energy and sincerity the musical requires of them.


Joaquin, who was part of New Voice Company's The Male Voice last May, did not disappoint as the musical's male lead. He managed to charm as early as his first song, "All That's Known," and was able to match the bravado of Manalo as the manic Moritz, who was clearly the musical's most interesting character. This energy seemed lost in most numbers, such as in "The Bitch of Living." This song pretty much encapsulates the theme and tone of the musical—it is irreverent, tragic, and true. It would be interesting to see how they can make the sentiments of the song (with lyrics that go, "She said: "Give me that hand, please/And the itch you can't control/Let me teach you how to handle/All the sadness in your soul") seem more genuine.


Nonetheless, Joaquin made the captivating music and almost poetic lyrics of Sheik and Sater work well; for two hours, I was convinced he was a 15-year-old boy looking for the answer we all asked ourselves as teenagers.


Bea Garcia's Ilse, the bohemian outcast of the group, is a standout despite having limited stage time.Sitti, as with most of the cast, had minimum stage time, but she did get to sing one of the musical's more rousing songs, "The Dark I Know Well." Here, the well-known bossa nova songstress was adequate, and it would be a pleasure to see how she grows into her character.


Nar Cabico (as the innocent Ernst) and JC Santos (as the sophisticated Hanschen) shocked and brought the house down with their performance of "The Word of Your Body (reprise)."


During the intermission (and after the controversial sex scene), all I heard everyone talk about was the sex. But Spring Awakening is more than just the sex. More than anything else, Atlantis' Spring Awakening is a wonderful demonstration of how talented and brave our actors are.