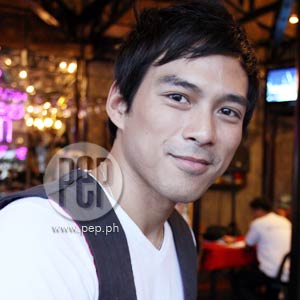 Guji Lorenzana (in photo) will be part of the October 6 performance of Believe The Pop Musical, to be staged at the Music Museum. The Star Magic talent and Voizboys member says that his own album will be coming out soon.

A combination of film, theater, and concert, Believe The Pop Musical tackles how the power of overwhelming love can conquer a world consumed by fear. The Manila run will be shown at the Music Museum on October 6 (Tuesday) at 8 pm.

A press conference was held yesterday, September 28, at the Music Museum, for the musical play that was first staged in Cebu last July.

Star Magic talent Guji Lorenzana is set to play one of the characters, a heartbroken individual who stops believing in the power of love. "He's struggling with the idea that love does not exist," says the ASAP performer in an interview. "It's an eternal conflict between him and God, because he doesn't want to believe that love exists anymore. He has to find love within himself. That's when he overcomes his fear."

Guji, who is more recognizable as a crooner on ABS-CBN's variety show ASAP, had his beginnings in theater. He had been doing theater in New York and California where he grew up, before moving back to the Philippines.

"I grew up in theater—children's theater, musicals," shares the 27-year-old singer who is part of the all-boy band Voizboys. "Music has always been my thing. Coming back here in the Philippines, I did [a lot of stage plays]. As far as background is concerned, this is something I love to do. I'm always happy to be doing this. Very happy actually."

With his love for theater, would he say that he's more interested in theater than TV?

He elaborates, "The thing with stage is, you feed off the audience, so you feel them feeling you and vice versa. In theater, when you experience a certain feeling, you really experience it. In TV, with everybody there, all the crew and everything, they're not feeling what you're feeling. That's the big difference. I still feel theater is my first love, I'm always gonna go back to theater no matter how many projects I do, I'll always go back to theater music."


THE PLAY. Believe features songs that were handpicked by the cast members and producers based on the songs they like. "From there, we made a story out of it, basing on the character," explains cast member and co-producer Marq Dollentes. "And then we specifically chose who would arrange it, who could make it sound best for a particular scene."

The songs included in the play are pop songs but arranged differently to sound like a completely different song, says Dollentes. It was made that way "so that we have another thing to offer to the audience," he adds. "We really put all of our strength to create a new sound for each of the segments."

The songs included in this musical are "Bring Me To Life," by Evanesence; "I'm Your Angel," by Celine Dion and R. Kelly; "She's Out of My Life," by Michael Jackson; "No Matter What," by Boyzone; "Reflections" and "Voice Within," by Christina Aguilera; and "Because of You," by Keith Martin, to name a few. Other songs include hits popularized by Natasha Bedingfield and Josh Groban.

Also featured are some original songs like "Flow" sung by Marq Dollentes, Isabella's song to be included in her own upcoming album, and Guji Lorenzana's own composition titled "Incredible."

With his own album currently in the works; Guji trusts in the importance of Believe in his career. "I'm hoping this opens more doors to that. I think everything has its time. I've envisioned this to come to my life first, so before a big album comes out, [Believe] has to happen."

THE THEME. Guji Lorenzana tells PEP that his major musical influence is the late Michael Jackson. For his repertoire in Believe, Guji will be adding his personal pop-rock flavor to each of the songs he will be performing on October 6.

"I wouldn't be a performer today if it wasn't for [Michael Jackson]," he relates. "I always knew deep down inside that he had a higher purpose, and I strive to be a performer who also has that. People only see what's on top, but there's so much more underneath. I hope people, especially through this musical, see that about myself. About everyone that's involved."

Believe is a play where music, love and faith all converge to tug at the heartstrings of Filipino audiences. And with God and love as underlying themes, it explores a realm far deeper than what mere surface could show.

"With everything that's been going on now, we realized how important this is for everybody to see," Guji explains to PEP. Cast member Marq Dollentes agrees and points out, "I think that was one thing that was not taught in school... to dream. And dreaming is really important, because that's where you move onto new levels in your life. That's really our message."

All of the cast members admit to having strong faith in God. Guji even revealed that he used to be an altar boy until the age of 18, and he was supposed to enter seminary school to become a priest.

What made him decide to follow another path instead?

He tells PEP, "Honestly, I like girls too much," the Star Magic talent joked, after which he said seriously, "One day I want to have a family."

"My faith is very strong," he continues. "I feel that as human beings, we stray a lot. The point of this musical is believing in yourself, finding what's important inside. And for everybody, whether they call it God, or love... it's inside."

To this, Marq Dollentes adds, "Because the state of the world now is very fearful, the economy is going down, it's going downsteam. So we had to make something that goes upstream."

Guji encourages everyone to see Believe "not because they support me," he says, "but because they support the purpose of what we're trying to do here. And [I hope] that they come out from this stronger in themselves, and that they find more meaning in their lives—whether they've lost [such meaning], it's reborn, or if it can add to what they already believe in. I hope this does something to them."


Believe The Pop Musical will be shown at the Music Museum on October 6 at 8 pm. It serves as a fundraiser and the opening activity of the annual convention of the Cancer and Health Awareness Outreach Program presented by The Philippine Society of Medical Oncology.