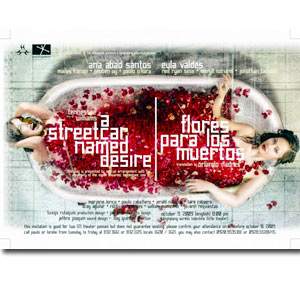 Tennessee Williams' Pulitzer Prize-winning play, A Streetcar Named Desire, is Tanghalang Pilipino's third offering for its 23rd theater season that celebrates "Women of Substance." It has been translated by Orlando Nadres into Filipino as Flores Para Los Muertos.

Perhaps his greatest masterpiece, the play is Williams' classic piece on the relationships of people, life and death, the dangerous conflict between reality and fantasy and the desire for human contact. It paints the staunch character of Blanche Dubois, whose complicated psychological makeup as she confronts reality is a sure challenge to any substantial actress.

Blanche Dubois, the main character says, "I don't want realism; I want magic." Blanche's deception of others and herself is not from malicious intent, but rather from a heart and spirit broken by adversity and forced to retreat to a kinder, purer time that no longer exists.

Eula recalls the first time that she heard about doing this play. "When Tata Nanding, vice-president of CCP's Tanghalang Pilipino, asked me to do A Streetcar Named Desire last April 27, I immediately said yes without knowing the weight of the role.