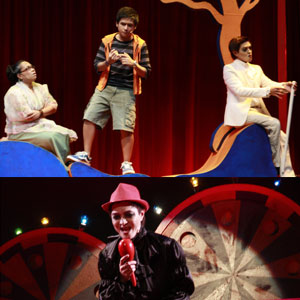 The grandmother of Juan Tamad sees his transformation as a pro-active citizen despite the influence of the Diyablo (bottom frame, portrayed by Vince de Jesus). PETA will stage Si Juan Tamad, Ang Diyablo at ang Limang Milyong Boto on October 24-25.

Most Filipinos are familiar with the character Juan Tamad: a fictional character who's so lazy, he just lays under a guava tree, waiting for gravity to drop the fruit to him.

PETA (Philippine Educational Theater Association) revives this character with a modern-day twist through Si Juan Tamad, Ang Diyablo at ang Limang Milyong Boto. It will be staged at the PETA Theater Center in Quezon City from October 24 and 25.

This hilarious vaudeville musical play shows the transformation of an apathetic Juan Tamad to a pro-active Juan Tama. Through song-and-dance numbers, theater audiences will be entertained as well as educated about the importance of the electoral process. In fact, one segment of the two-act play thoroughly explains the registration process for first-time voters.

It also presents a satirical view of characters often seen during the elections, which is depicted in the play as one big carnival.

SYNOPSIS. Si Juan Tamad, Ang Diyablo at ang Limang Milyong Boto is set in the fictional land of Isla Filiminimon. It centers on Juan Tamad (nicknamed JT), a young boy who's a virgin. A virgin voter, that is. Since his parents are overseas workers based in the remote, sandy island of Isla Agimat, JT is being raised by his grandmother.

With the presidential elections drawing near, his grandmother pushes JT to register and vote for the next leader to sit in the Palasyong Bato. While performing his duty as a citizen, JT meets a young girl who makes him realize that patience is truly a virtue.

On election day, candidates have their own gimiks to entice voters. The fiesta-like atmosphere is heightened by a samba dance number that asks viewers not to sell their votes to unscrupulous politicians. The cast members even tap audiences to come up onstage and dance along with them.

JT becomes frustrated when his candidate loses, causing him to become apathetic to the situation of the country. But when an accident almost kills his grandmother, he gets a wake-up call to become more involved in youth community efforts.

Written by Vincent De Jesus for first-time voters, Juan Tamad hopes to encourage the youth not only to register by the end of October but more importantly to participate as vigilant young citizens who will ensure good governance after the elections by continuing to demand the best from their elected leaders.

At the end of this month, five million youth voters are expected to register for the 2010 elections. Those five million virgin votes, combined with the nine million already registered youth voters, have the power to swing the course of the national elections and eventually the entire Philippine political history.


The play Juan Tamad is actually part of the voter's education campaign of PETA dubbed as Casting Call: The Virgin Voter's Campaign, "I Want My First Vote to Count." This campaign is accompanied by Bagong Bilang, a workshop performance by PETA's youth arm to be conducted in various schools and communities as part of the voters' education campaign. The workshop engages the youth in discussions on the importance of the elections and citizens' participation, while giving criteria for choosing fitting candidates.