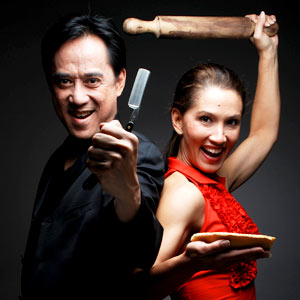 Audie Gemora and Menchu Lauchengco-Yulo will bring life to the murderous duo of Sweeney Todd. This Repertory Philippines production will be staged in Makati City from November 14 to December 13, 2009. CLICK HERE to buy show tickets.

In 2007, Johnny Depp shocked moviegoers when he portrayed the demon barber of Fleet Street in the Hollywood film Sweeney Todd. Using a blade as his weapon of choice, he slit the throats of his victims and disposed of their bodies by passing them to his accomplice Mrs. Lovett.


Helena Bonham Carter's character then included the body parts as the filling of her meat pies, making it a tasty treat that was a big hit among her customers.

This year, theatre veteran and Talentadong Pinoy juror Audie Gemora will portray Sweeney Todd, the murderous barber who is bent on exacting revenge on those who wronged him.

Audie and Menchu will be ably supported by a big ensemble that includes Franco Laurel, Robbie Guevara, Rem Zamora, Roger Chua, Joy Virata and many more.

This is the second time that Repertory Philippines will be mounting this production. It was first staged in 1982 under the able direction of the late Zeneida Amador. In the title role was Junix Inocian, who known in theater circles as having played The Engineer in Miss Saigon and Baby Barredo as Mrs. Lovett.

Others in that 1982 production include Cocoy Laurel as Anthony, Raymond Launchengco as Tobias, Menchu as Johanna, and Joy Virata as the Beggar Woman. Critics gave mixed reviews for that said production but many still believe that the said production was the best that Repertory has produced to date.

This year's production will have Joy Virata joining the ensemble. Franco Laurel is thankful that he gets to play the role essayed by his uncle Cocoy Laurel. Baby Barredo now co-directs this production with Michael Williams.

DIFFERENT FROM 1982 VERSION. "I think this year's production will be very different because it is being directed by a different person with a different cast but with the same material. We're following the original script. It will be more different in the attack and how the scenes will be played out. It's a more realistic and more direct approach as compared to the 1982 show," said Menchu, who will be playing the role of Mrs. Lovett, the woman who .

"I feel very, very excited. Mrs Lovett is a dream role for me. It is a difficult challenge and I'm very happy to be able to get this role at this point in my career. When I played Johanna in 1982 I was just 19 years old. Already then, I was already overwhelmed by the difficulty of the music. I realize now how to difficult this is now because I can understand and appreciate the music compared to when I was just 19," Menchu pointed out.

For Audie, he believes that this is a dream role for everyone in the cast.

"I was too young to play this role at that time. Dream role ko na talagang gawin yung Sweeney Todd. Swerte naman that Tita Baby Barredo drafted Menchu and I. Hindi na kami pina-audition. Pero we still had to sing. But this was practically handed to us in a silver platter," he said.

Audie is more reflective about being cast in Sweeney Todd, "When a good role like this comes, which is very rarely, nabubuhay yung desire to act para sa akin. There are many times on that stage kapag nag-re-rehearse kami, I sometimes thank God that this really where I belong. There is really a joy of bringing to life to a character onstage. I guess that's why people really like to act because it gives you power to bring to life characters."

Sweeney Todd is a 1979 Tony-winning musical featuring the music and lyrics by musical theatre legend Stephen Sondheim, and book by Hugh Wheeler. It is based on the 1973 play Sweeney Todd, The Demon Barber of Fleet Street by Christopher Bond.

Sweeney Todd opened on Broadway at the Uris Theatre on March 1, 1979. It ran for 557 performances.

Playdates of Repertory Philippines Sweeney Todd (The Demon Barber of Fleet Street) are on November 14 until December 13, 2009 with shows scheduled every Friday and Saturday at 8 pm and Saturday and Sunday matinee at 3:30 pm. Performances will be at Onstage, 2nd floor of Greenbelt 1 in Makati City.