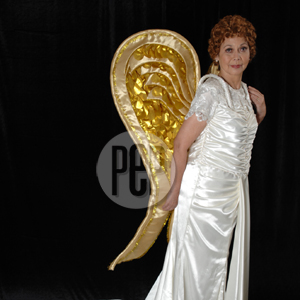 For its last play this season, Repertory Philippines presents a hilarious true-to-life comedy entitled Glorious. Ittells the fascinating true story of New York socialite Florence Foster Jenkins who was popular in the ‘30s and ‘40s and became known as the "First Lady Of The Sliding Scale."

Glorious made its debut in the Philippines last April 13 at Onstage Theater in Greenbelt One, Makati City. This comedy by Peter Quilter opened in London in 2005 and is presently being performed in community theaters in The United States, England, and Canada. Repertory Philippines, in cooperation with the City of Makati, brings it to Manila.

Joy Virata plays the delightful diva who won the hearts of New Yorkers and drew thousands to her recitals and balls at which she performed despite a voice that, in the words of one angry critic "nature threw" (at her), and the inability to recognize differences in pitch and tone. If she had performed as a contestant in today's American Idol she would have drawn a "definitely pitchy" from all three judges.

Glorious is the last play of the season of Repertory Philippines—a non-profit community theater company—now in its 40th year of producing plays in English.

Rep's program for the second half of the year includes Disney's Cinderella for the Children's Theater, William Shakespeare's Love's Labours Lost for Rep Classics, and Fiddler on the Roof as the big musical of the year.