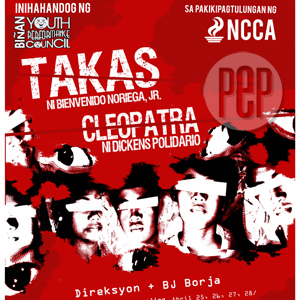 This summer, the Biñan Youth Performance Council (YPC) shall be staging two Filipino one-act plays in the town of Biñan, Laguna—a municipality not only famous for its "puto" but also for its aspiring talents of Philippine theater.

Takas by Bienvenido Noriega, Jr. and Cleopatra by Dickens Polidario, will be staged back-to-back from April 25 to 28 in Biñan, Laguna. YPC founder and artistic director Bryan Jayson Borja directs the plays, which were made possible through the support of the National Commission for Culture and the Arts.

The playwright of Takas, Bienvenido Noriega, Jr., is a seasonal winner of the prestigious Don Carlos Palanca Awards for Literature. He is the writer of Deuterium, first-prize winner for the said award for the category of full-length play in Filipino in 1990. On the other hand, Dickens Polidario, playwright of Cleopatra, is a Theatre Arts major of the University of the Philippines. He is also a graphics designer and has participated in a number of past theatrical productions.

The municipality of Biñan lies in the center of one of the oldest river trade routes of the Spanish colonies in the Philippines. Today, it is a bustling town for businesses and holds the third largest portion of the residents of the province of Laguna.

Theatre has traditionally stayed in the backside of the culture and arts scene of Biñan. This had been so until the YPC, a non-profit community theatre, was launched on August 7, 2005. The YPC was established to inspire the youth of the local community to practice theatre as means to develop their skills, enhance their talents, and stage seasonal productions.

The array of genre range from gospel to contemporary productions such as: Kariton (December 2005), Mga Kwentong Buhay sa Harap ng Telon (April 2006), Reality and D' Istori of Krismas (December 2006), among others, was mounted all under its vision of exposing Biñan youth's talents in the theatre arts scene, and preserving the community's rich practices in culture and the arts.

"As a lover of the art of theater, it is saddening to see that the local community is not exposed to the beauty of art: what it has to offer, what it can achieve, and what it can accomplish. The YPC has changed this, although not completely," says YPC founder and artistic director BJ Borja. "In the short span of two years, the group has surpassed what was initially expected of it, and I envision that the YPC will achieve further in the years to come because of the love and dedication of its members to the community."