Romeo and Bernadette to be staged from February 5-28 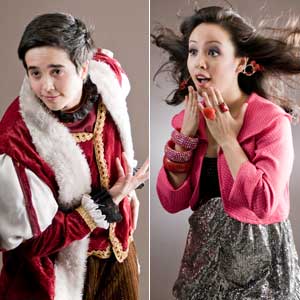 
Directed by theater stalwart Joy Virata and starring young stage veterans Cris Villonco and PJ Valerio, Romeo and Bernadette is a light-hearted twist to the tragic tale of Romeo and Juliet that will surely tickle the funny bones of Pinoy theater aficionados everywhere.


Set in 1960's New York, Romeo and Bernadette is full of familiar Italian melodies from TV and movies that audiences will enjoy. Last January 26, members of the press were treated to three sneak performances of—in Joy Virata's own words—"Repertory's first silly play," at The Roxy in Tomas Morato.

Cris Villongco, who plays Bernadette, decribes the hilarious premise of this play:" It's the story of Brooklyn Guy and Brooklyn Girl. Brooklyn Guy is trying to take Brooklyn Girl to bed so he brings her to a Shakespeare play. But the girl gets upset over the play, so to win her back he creates this story of Romeo not dying, he took a lot of the sleeping potion and knocked himself out, woke up and it's 1960's Brooklyn New York."


The theater actress was last seen playing the lead in Repertory's Mulan back in February 2008. She refuses to divulge the ending, but reveals that she watched The Godfather and My Cousin Vinnie to perfect her Brooklyn-Italian accent for the play.

PJ Valerio, who takes on the role of Romeo, is currently a mainstay of Kuya Germs' late-night show on GMA-7, Walang Tulugan. He was also cast in Repertory's 2009 staging of Fantasticks. He reveals that to learn more about his character he watched Baz Luhrmann's Romeo + Juliet starring Leonardo DiCaprio and Claire Danes.


"I had to imbibe the Shakespearean accent, speak in Old English and mimic the right gestures," he shares. It was one of the biggest challenges PJ had to hurdle for the play, while for Chris it was simply being able to keep her acting comedic and campy. "I'm used to playing dramatic, heavy roles. Tita Joy would always remind me to have a light mindset, because according to her if you have a light mindset, everything will follow. She is a hands-on director and I appreciate that," enthuses the thespian.

Director Joy Virata, in turn, has nothing but praises for the young actors. "Romeo and Bernadette is a farce, and it is the hardest thing for an actor to be in a farce, to know the line between slapstick, truth and exaggeration." She adds that, "There is no difference between working with old actors and young actors, a good actor is a good actor, and a good actor doesn't grow old." She also revealed that she chose this particular cast very carefully, 'I did not want to do a lot of work, so as you can see it is Repertory's sparsest production." Her choices obviously paid off, as Joy shares that directing the ensemble was a breeze.

This could probably be because most of the cast are totally at ease with each other. Cris and PJ share two kissing scenes but it's not awkward, even if Cris is 26, and PJ is seven years younger than her. PJ looks up to Cris as his "Ate."


Cris even revealed: "Lagi ko ngang pinapagalitan yan 'e. He's young, I see myself in him, but when he gets serious he delivers and it surprises me, and you know what, it happens a lot."


Being with an older, more experienced leading lady sometimes scares PJ. He admits, "I get intimidated working with Cris, but it's nice having her as a partner because she is so professional."

After Romeo And Bernadette, PJ is gearing up to audition for Repertory's staging of Equus. He has no qualms about going nude if he does get the controversial part. "It's not really a transition into sexy roles, it's more about playing that role because I am passionate about it," he clarifies.


Cris, who just came from a year-long stint as a vocalist for The Golden Mickeys in Hong Kong Disneyland, is currently managing the family business, but open to doing TV, movies and Repertory musicals if the opportunity arises, "I know Rep has a lot of plays lined up this year, so, we'll see".

Cris and PJ are confident that Romeo And Bernadette will follow the success of Repertory's last romantic comedy, Duets. "Filipinos will like it because it's fun and we are hopeless romantics," Cris confidently explains. "Plus, Pinoys love music, and I think the audiences are familiar with and will enjoy the songs," adds PJ.


The ensemble includes Red Concepcion as Brooklyn Guy/Dino, Liesel Batucan as Brooklyn Girl/Donna and assistant director Rem Zamora who takes on 8 cameo characters in the play.

So, for some fresh, sassy, and funny amore be sure to catch Romeo and Bernadette at Onstage, 2nd floor, Greenbelt One, Makati City from February 5 to 28, 2010.