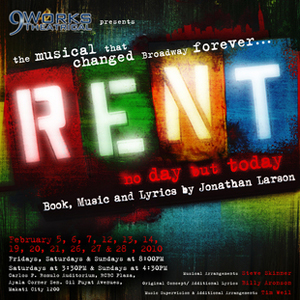 From the moment people got wind of a call for auditions for 9 Works Theatrical's production of Rent, the well-loved musical automatically became one of 2010's must-see plays. Manila had already seen two productions of Rent back in the '90s, but that did not seem to be enough for fans who called themselves "Rentheads." News of the play's restaging also sparked hope in fans who missed the past productions.

What, then, should people expect from this year's Rent?

Audiences that have already seen Rent on stage would likely base their judgments on the previous productions, but 9 Works keeps the revolutionary rock musical irresistible with its exciting cast of theater favorites and promising greenhorns. The impressive set design meets all our expectations, as it appears to be quite faithful to the Broadway setup. Those who are watching the musical for the first time should brace themselves for dynamic scenes where things seem to be happening all at once.

What remains constant is the unforgettable and timeless story of a group of starving artists, who, despite poverty and illness, learn to fall in love, find their voices, and bring a universal message of hope to everyone.

Set in New York City's gritty East Village, the first act starts on a Christmas Eve when Mark Cohen, a filmmaker, starts shooting without a script. We also get to know his roommate and best friend Roger Davis, a struggling musician who is revealed to be HIV-positive. Their friend and ex-roommate, Tom Collins, arrives at their building but is assaulted before he could enter their apartment. As they wait for Collins, Roger and Mark receive a call from their former roommate and now landlord Benjamin "Benny" Coffin III, who reminds them of their overdue rent.

Collins lies beaten up on the street until Angel Dumott Schunard, a street drummer and drag queen, arrives and tends to his wounds. Though the two learn that both of them have AIDS, they quickly fall in love.

Mark, Collins, and Angel try to coax Roger out of the apartment and into a life support meeting, but he insists on staying indoors. As he attempts to write "one final song," he is interrupted by Mimi Marquez, an S&M dancer who begs him to light her candle. They are instantly attracted, but Roger refuses her advances.

Meanwhile, Mark sets out for the lot where his ex-girlfriend, Maureen Johnson, is scheduled to join a protest rally against Benny's eviction of the homeless. There, he meets Maureen's new girlfriend, Joanne, who is struggling with the sound equipment and Maureen's many demands. Though they had evidently dreaded meeting each other, they discover that they actually have a lot in common.

This group of bohemians gets through the holidays, but not without a few snags: Roger continues to resist Mimi, Maureen's protest forces Benny to padlock Roger and Mark's apartment building, and Joanne finds herself growing tired of Maureen's diva act. Still, the artists rejoice, not knowing that tragedies await them in the second act.

Those who have never seen Rent onstage may be surprised that there is actually more singing here, other than the tunes that most of us already know.

Aside from the emotionally charged "Seasons of Love," "Another Day," and power anthems "Rent" and "La Vie Boheme," the play also features singing voicemails from minor characters, amusing tune ups by Mark and Roger, a Christmas carol, two versions of "Happy New Year," "Contact," which features a dying Angel, and "Your Song," which Roger sings to Mimi in Act II.

Those who are looking forward to seeing the Rent staples being performed on stage will surely be thrilled with the soaring renditions of "I Will Cover You" by a giddy Collins and Angel, "Over the Moon" by an enraged Maureen, and "Without You" by a mournful Mimi.

No doubt, theatergoers would expect much from the 2010 cast. Though a few main actors and some members of the ensemble could still give their performance a few tweaks, it is undeniable that a number of them are truly made for their roles.

First-time lead actor Gian Magdangal does not disappoint as Roger, especially when he sings his solo, "One Song Glory," and duets with Frederick Lo's Mark for "What You Own." His voice has just the right amount of a rock musician's growl, which is essential for his character. He also shows restraint and shy playfulness in his scenes with Nicole Asensio's Mimi.

Carla Guevara-Laforteza is likewise a formidable and unforgettable Maureen, who truly owns her role right from the very first lines of "Over the Moon." She even succeeds in making the audience "moo" with her as if they, too, are protesting Benny's plans for the bohemian community. Perhaps it was wise that Maureen came to stage almost halfway through the play, because Guevara-Laforteza stole the show the moment she made her heart-stopping entrance. From then on, she could do no wrong -she only upped the audience's love for Maureen more when she sang "Take Me or Leave Me" with Jenny Villegas' Joanne.

Newcomer OJ Mariano, who plays Collins, is a revelation. Aside from sounding almost exactly like Jesse L. Martin from the original Broadway cast, he plays Collins with a cool, composed air, but succeeds in moving the audience to tears with his rendition of "I'll Cover You (Reprise)."

Frederick Lo, who is also new to the stage, has Mark's charms and quirks, but his voice tends to drown out in big group numbers. Mark supposedly leads "La Vie Boheme," but Lo struggles to make his voice soar amid the rest of the cast's combined vocals. However, he redeems himself in "On Your Own," where he shows that his vocals can still improve over the course of the play's run.

Asensio's voice sounds too mature for 19-year-old Mimi, especially when she sings "Light My Candle" with Magdangal. Still, she makes up for it with "Without You," where her voice matches the song's mournfulness.

This year's Rent may or may not hold a candle to the previous productions, but it still has all the verve that this beloved musical is known for. In our time, the material seems dated, but it never fails to spark a love for bohemianism in audiences, whether they are familiar with the culture of the late '80s or not. More than anything, the new production reminds us that the musical remains an ode to love that never diminishes in the face of disease, discontent, and despair.