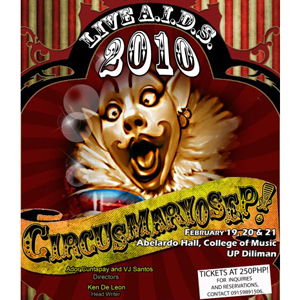 The University of the Philippines student organization SAMASKOM presents for its 26th annual performance a comedy with circus and politics in Live AIDS 2010: Circusmaryosep!

Live A.I.D.S. (Ang Istoryang Dinebelop ng SAMASKOM) is a hilarious musical-comedy-variety show written, choreographed, directed, and produced solely by the members of UP SAMASKOM. Its debut in 1985 gave birth to an annual standing-room-only event anticipated not only by the UP community but also by the nearby schools and by showbiz personalities. Live A.I.D.S. performances gained popularity year after year, bringing laughter to students, faculty, and other audiences who simply want entertainment.

The secret of its success lies in the incredible talent and camaraderie among the members. The much-awaited event features hilarious spoofs of current events, television commercials, newsmakers, as well as exciting production numbers with original musical scoring and choreography.

Audiences are predominantly the youth, aged 16 to 35 years, belonging to the A, B, and C social strata of the student and working population.

On their Silver presentation, expect a crazier Live AIDS 26th edition on February 19, 20 and 21 at the UP Abelardo Hall Theater with LIVE AIDS 2010: Circusmaryosep!

WHAT IS UP SAMASKOM? The UP Samahan ng mga Mag-aaral sa Komunikasyon (UP SAMASKOM) is a university-wide organization based in the College of Mass Communication of the University of the Philippines-Diliman. Founded in 1974, the group is composed of diversely talented UP students who have what it takes to rise above others.

Along with countless media practitioners, visual artists, musicians, directors, artist managers, creative directors, script and news writers who call themselves SAMASKOM alumni (now numbering about 1000), the group went through the same pains and unique bonding that bring all SAMASKOMers together.