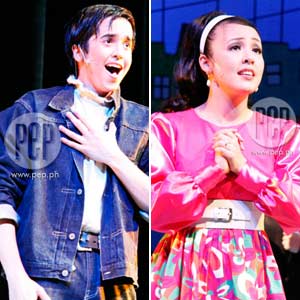 Imagine transporting Romeo 400 years to the future after he was supposed to have died in the loving arms of his beloved Juliet. Romeo, who hasn't aged a bit, looks for his long lost love but happens to be smitten by a look-alike of Juliet named Bernadette.

In this play by Repertory Philippines' Romeo and Bernadette, PJ Valerio effectively plays a smitten Romeo who is transported to the world of mafias in New York and Italy. Not realizing that he has been transported to the year 1960, PJ relentlessly finds his Juliet in the person of Bernadette, a naughty, loud-mouthed and wise-cracking Brooklyn girl, played by Cris Villonco.

SYNOPSIS. Romeo is dead. Or so we thought. The young man from 16th century from Verona, Italy managed to drink a potion that cryogenically freezes him until he wakes up in the year 1960.

Romeo and Bernadette chance upon each other on a bridge. Believing the modern-day girl is his Juliet, Romeo follows Bernadette across the Atlantic Ocean. The search brings him to Brooklyn where he finds out that Juliet is part of an Italian mob family, the Penza family.

It turns out that Bernadette is about to be married to her fiancé, a very charming but stupid mafia mobster, Tito Titone. Still, Romeo is determined to make Bernadette fall in love with him.

The love-struck guy becomes a member of the rival mafia family after he saves the life of Dino Del Canto. Romeo then learns about the ways of the world from Dino.

When Romeo and Bernadetet finally meet again in Brooklyn, the Brooklyn girl is enamored by his charming ways of wooing her. She begins to have doubts about marrying Tito.

Will Romeo and Bernadette end up together? Or is Romeo still fated to have a tragic love story in 1960?

HILARIOUS ROMANTIC ADVENTURE. Romeo and Juliet is a tragedy written by the English bard named William Shakespeare set in the 1500s. Many years later, Romeo and Bernadette was written by Mark Saltzman as a romantic comedy that serves up a hefty dose of humor and a genuinely happy ending.

One can feel the helplessness of Romeo when viewers see him waking up to a new environment. He is still dressed in Elizabethan fashion while the other cast members are dressed up as residents of the '60s. PJ, being the youngest member in the cast, is perfectly cast as a lost man-child. He also gives a good portrayal of a hopeless romantic. It is interesting to watch PJ speak using Shakespearean English where he expresses himself in a long-winded manner.

Cris Villonco shows theatergoers another facet of herself by playing the bitchy but intelligent Bernadette. The 26-year old theater veteran gives a mature take on the Brooklyn girl. She is very effective in being irritable and moody by virtue of being a mobster's daughter. She also shows her sensitive side as she pines for someone who will take her out of the mob business.

Among the supporting cast members, Rem Zamora practically stole the show for his rib-tickling, cross-dressing roles of Arden, the wedding florist to Viola, a ballroom instructor trusted by the mob and to Roz, a witty old seamstress. Rem plays a total of eight characters but these three stood out the most.

Red Concepcion is an effective storyteller as Brooklyn Guy and he gives a tough-yet-gentle portrayal of the mobster Dino. Liesl Batucan is cast as Donna, the love interest of Dino. Liesl somehow reminds me of Fran Drescher of U.S. sitcom The Nanny, with her high-pitched nasal voice and Brooklyn accent.

Providing accompaniment to the merry play is a four-piece orchestra playing familiar tunes.

Romeo and Bernadette is a highly entertaining musical that is brought to life by talented thespians. Joy Virata's steady hand in directing her actors was evident by the way the stars tried hard to restrain themselves from laughing out loud when they blurt out a funny line.

By watching this Repertory Philippines production, you will be guaranteed to have one funny valentine on this merry month of love.

Romeo and Bernadette will be staged at Onstage, 2nd floor, Greenbelt One, Makati City until February 28, 2010.