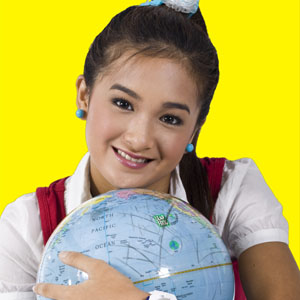 Julia Abueva has performed in concerts and musicals in Singapore and the Philippines ever since she was 5 years old, sharing the stage with world-class talents Lea Salonga, Monique Wilson, Deborah Gibson, among others. She was even recently handpicked by Oprah Winfrey as one of the "World's Most Talented Kids" and has already performed for U.S. President Barack Obama and other world leaders.

Shuttling between countries for 13-year-old ingénue Julia Abueva (Children's Letters to God, The Fantasticks) is a normal commute for Pocketful of Kids' young creative consultant for their ENCORE! musical theater program.

"Young students must perform in shows that are fun for kids—musicals like Annie, Oliver, The Sound of Music and Disney shows," says Julia.

"Pocketful of Kids' ENCORE! musical theater program is basically targeting kids who want to hone their talents. Some people have negative thoughts about performing; therefore some kids don't get to develop their talent. But we at ENCORE! encourage them. Kids are often iffy when it comes to acting or singing because kids our age are inclined to tease them or even say nasty things. But it's actually a cool thing, and a lot of opportunities can come in.

"It doesn't really matter how young you are, you can still live out your dream," she adds.

Julia has performed in concerts and musicals in Singapore and the Philippines ever since she was 5 years old, sharing the stage with world-class talents Lea Salonga, Monique Wilson, Deborah Gibson, among others. She was even recently handpicked by Oprah Winfrey as one of the "World's Most Talented Kids." She manages to juggle schoolwork with her performing commitments including her recent performance at the 2009 APEC where she performed for U.S. President Barack Obama and other world leaders.

Mentoring the ENCORE! musical theater program is international stage actress Jenny Jamora whom Julia had the pleasure of working with in some of her past shows.

"She's a brilliant performer. I learned a lot about performing by just watching her," lauds Julia.

ENCORE!, the performing arts school, has its own mini theater at Pocketful Of Kids' 250-square-meter toy store in the Ortigas Center. Board members, instructors and consultants range from experienced theater personalities like multi-awarded director, TV and stage personality Leo Rialp and international theater artist Jake Macapagal.

Those who want to develop their talents and live their dreams of performing on stage can do so at ENCORE! It has a wide range of classes including Musical Theater, Voice and Props Production.

ENCORE! students will be showcased in a concert on February 27 at the Sunset Pavilion of Hotel Sofitel, Manila. Julia will be performing with them together with acclaimed international musician Jon Schmidt and cellist Steven Sharp Nelson.

For more information about the ENCORE! musical theater program or for tickets to the concert, call Pocketful of Kids at 634-2888 and 634-7888; or visit them at Unit A, 15th Floor, Strata 2000 building on F. Ortigas Jr. Road, Ortigas Center.