Romeo and Bernadette will stage final performances from Feb 26-28 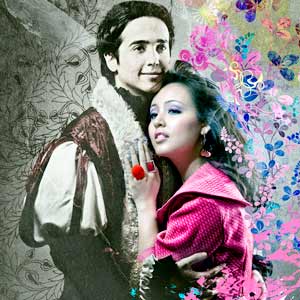 
Just as everyone thinks that Romeo and Juliet, the greatest love story of all time, has a tragic ending, Saltzman breaks the news by continuing this romantic tale and reviving Romeo in a new era in Romeo & Bernadette.


In this romantic comedy, Romeo did not die from drinking poison as what William Shakespeare has originally written. Here, it appears that it was not poison that he took but a sleeping potion that put him to sleep for a few centuries.


Fast forward to circa 1960, Romeo wakes up from a long slumber and meets a woman whom he believes to be Juliet. However, Juliet is really dead and the woman that Romeo thinks to be the love of his life is really Bernadette, daughter of the infamous mob leader Sal Penza in Brooklyn, New York.


Not wanting to believe Bernadette's explanation, Romeo follows and chases after Bernadette from Verona to Brooklyn, and finds himself in the company of Sal Penza's rival family, Don del Canto. No matter in what era Romeo belongs to, he seems to be always involved in a pattern of feuding families. Unlike Shakespeare's Romeo and Juliet that had two dead characters in the end, Saltzman's Romeo & Bernadette ends up with two lovers with a happy ever after.


What makes Romeo & Bernadette a success is its roster of excellent cast as handpicked by director and seasoned actor Joy Virata. "It's a pat on my back that the cast did a wonderful job since no auditions were held and it still came through," claims Joy. "I personally know all of the cast members and I know what each of them could do."


PJ Valerio plays Romeo in this Repertory Philippines production. He fits the description of the passionate and courtly knight in shining armor who is willing to die for his beloved. PJ also has the warm and gentle voice of a true romantic such that one night when Romeo serenades Bernadette with the song "O, for a song," it surely captures Bernadette's heart. One can also feel that romance is in the air when PJ sings "That's love."


"Aside from having to get used to speaking Shakespearean English, I have to constantly assume and project the classical pose of courtesy that sets me apart from the other present day laidback characters," explains PJ who is not new to playing lead roles in musicals. "Despite the challenge in the role, my character spells great fun."


Cris Villonco takes on the role of the vulgar, sexy, spoiled brat Bernadette, who is a hopeless romantic deep inside and wanting to marry a fairytale-like prince. Cris admits that she has always been used to performing serious roles, hence this is a challenge for her. She starred in Hamlet three years ago and this is her first Shakespearean spoof.


"It's really different from the genuine Shakespearean plays," shares Cris who spent three months studying and preparing for the role. "I watched a lot of clips from My Cousin Vinny and practiced my accent carefully so I can give justice to the character. It's a load of pressure for me but I'm really having fun playing Bernadette."


Cris' sweet and charming singing voice is perfectly matched with her Romeo. This weekend is the last chance of theatergoers to hear their duet of "Moonlight Tonight over Brooklyn." As the song says, "Brooklyn could be anywhere," and so is their manifestation of love resonating from the stage.


On the other hand, Romeo's counter ego Dino del Canto is brought to life by Red Concepcion. Being the exact opposite of Romeo, Dino is the typical Brooklyn guy charged with lots of energy and tries to get women with his charisma and sensual drive.


The most challenging part of the role for Red is getting the Brooklyn tinged with Italian accent of Dino's character. He watched The Godfather for his reference to get into the character. And just like everybody else in the cast, he finds his part to be enjoyable especially since there is a lot of dancing.


Wanting to win the heart of another hopeless romantic Donna, played by veteran actress Liesl Batucan, Dino mimics the romantic style of Romeo and serenades her as well. Most of the time, Red and Liesl break the ice with their funny moments and antics. Watch their chemistry and impeccable timing onstage.


Generating a lot of infectious laughter from the audience is crowd favorite Rem Zamora who is playing a multitude of minor but very memorable roles. Rem proves that there are no small roles, only small actors. Everybody is amazed at how he changes into his roles and costumes, assuming a totally different character in a snap.


While others have just one or two roles to switch into, Rem has eight characters to study, not to mention that he is also the assistant director of the show. Rem plays the roles of an accordionist, an opera-style singer, a nervous airport immigration agent, a gay flamboyant florist, an Irish priest, a dominating female dance instructor, a female dressmaker, and a father to Donna.

Aside from having a good cast, the director is very happy with the set design by Denis Lagdameo. "He was able to interpret my concept very well. The one-dimensional set design is intentional to create an immediate comical effect. Even the glasses and the wine bottles appear to be cartoonish."

When the audience enters the theater, the stage looks bare at the start but as the musical progresses, and people see the different sets and the moveable two-storey house, one will be surprised at how the whole production team does it with speed and grace. There is indeed no dull moment in the musical, only laughter from beginning to end.