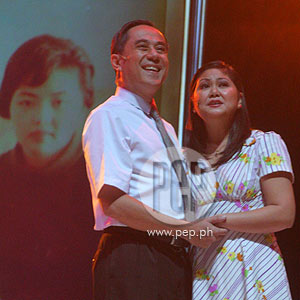 Through the magic of theater makeup, Audie Gemora was transformed into a man old enough to have 27 grandchildren and has already welcomed his first great-grandchild in this world.

Audie's resemblance to Oscar M. Lopez was uncanny as he brought life to the lead character of the musical play titled Undaunted. Through this musical saga that chronicles the story of the Lopezes of Jaro, Iloilo, audiences were able to get a glimpse of the falling and rising of the family's fortunes since the 1800s.

Originally conceptualized to celebrate the Lopez Group's 80th founding anniversary in 2008, Undaunted was re-written to take on the viewpoint of Mr. Lopez, who himself wrote and published the family genealogy contained in a book launched in 1982.

Affectionately called Oskie by his parents and known as OML in the business world, Mr. Lopez is the third and current chairman of the Lopez Group. He presides over 120 companies and foundations, including First Philippine Holdings Corp., Benpres Holdings Corp., ABS-CBN, Rockwell Land, Energy Development Corp. and SkyCable.

OML has been quoted as saying: "To survive, any business or corporation must be useful to the society it serves." For this reason, one segment of the play is dedicated to the third generation of Lopezes talk and sing about the current business ventures and corporate social responsibility efforts that they are involved in.

Theater actors portray ABS-CBN President Eugenio "Gabby" Lopez III and ABS-CBN Foundation managing director Gina Lopez as they point out how they are involved in CSR projects. The play ends with all 27 grandchildren of OML performing together to sing the finale titled "The Spirit That Moves Us."


UNDAUNTED THROUGH TIMES OF ADVERSITY. The musical play Undaunted also introduced audiences, composed mainly of Lopez Group employees, to the main personalities of the Lopez clan.

Reuben Uy portrayed the late Eugenio H. Lopez, Sr. (Don Eñing), founder of the modern day Lopez enterprise. Don Eñing is the father of Geny and Oscar, both of whom grew up during the tumultuous Second World War. In fact, both boys were in Baguio when Japanese planes bombed Camp John Hay in 1941.

Under the stewardship of Don Eñing, the Lopez Group from 1928 included two sugar haciendas, Spanish- and English-language newspapers, a shipping company, a bus company, and Iloilo-Negros Air Express Co., Inc. or INACE, the first Filipino airline.

Indie film actor Jake Macapagal played the role of Geny, who was imprisoned during the Martial Law years because of trumped-up charges of conspiring to assassinate former dictator Ferdinand Marcos. Like Serge Osmeña, Geny was imprisoned for five years in maximum security until they decided to escape from prison and stay in the United States.

In the souvenir program of Undaunted, OML was quoted as saying:

"The Lopez Group is also built to last. It is now 82 years old (by June 12) and I do hope it can last for centuries. That is the conclusion one gets after studying 200 years of Lopez entrepreneurship. That is also the theme of Undaunted, the story of how my father built the modern era Lopez Group. By imparting his undying values to us, his children, my father made sure that the Group will live on from generation to generation."


PASIG RIVER REHABILITATION. Jay Lopez, the youngest son of Oscar Lopez, emphasized that the rehabilitation of the Pasig River is a pet project that is enjoying support from the Lopez Group.

When PEP (Philippine Entertainment Portal) what other activities are included in the 80th birthday celebration of his father, he mentioned that there will be an inauguration for the school, church and 2000-square meter park in the resettlement site of Kapit Bisig para sa Ilog Pasig located in Calauan, Laguna.

He also mentioned that a livelihood training center will be put up in the area so residents will have a source of income.

"It's a huge area. There are 4,500 families living there in the 107-hectare project," says Jay. "All of them were relocated from the Pasig River area. It's all part of the Kapit Bisig para sa Ilog Pasig project. My dad [Oscar] fully believes in it. The whole company is also putting in resources for it."

Jay serves as the vice-president of communications for First Philippines Holdings.