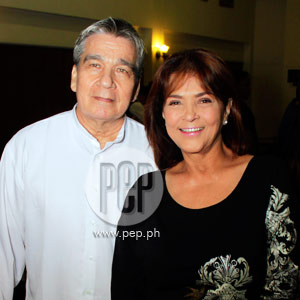 Gina Pareño took a week to decide if she would accept her first acting stint onstage. The movie and television actress has never been part of any theatrical production in her more than 40 years in showbusiness.

After reflecting on the merits of doing live theater, Gina accepted the role of Mary in the Asian premiere of Tanghalang Pilipino's American Hwangap. She and Mario O'Hara will topbill the Filipino version of this Asian-American play.

The play's director, Chris Millado, described how he and Nanding Josef, Tanghalang Filipino's Artistic Director, convinced the veteran actress to accept the role.

Gina revealed that Jeffrey Jeturian, the director who megged her award-winning film Kubrador, advised her to accept the role.

The veteran actress described the satisfaction that she felt while preparing for the play.

American Hwangap is a described as a dysfunctional comedy that is set in a suburban Texas home. The family is shaken up the arrival of their long lost father, who has come home to celebrate his 'hwangap' or 60th birthday ritual that marks the completion of the zodiac cycle and signals the rebirth. The wife and children prepare for the 'hwangap' of the father who has been missing from the family for the past 15 years.

Tanghalang Pilipino is delighted to have the Asian premiere of the play written by Lloyd Suh. The play premiered last March 2009 at the Magic Theatre in San Francisco, California. It was followed by a New York premiere in May of the same year.

The play will have Bembol Roco and Celeste Legaspi in the English version of the play.

Playdates will be every Friday, Saturday and Sunday of Septembers beginning September 10 and on October 1, 2 and 3. It will be staged at the Tanghalang Aurelio Tolentino (Little Theater) of the Cultural Center of the Philippines.