Gian Magdangal and Iya Villania will topbill The Wedding Singer 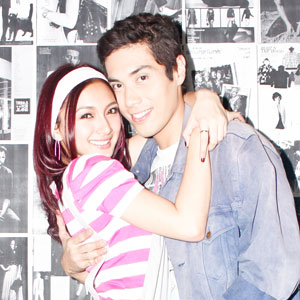 Iya Villania and Gian Magdangal lead the cast of the play The Wedding Singer, which will be staged at the Meralco Theater starting October 23, 2010.

Following the recent trend of movies-to-theatre productions that have come to town such as Atlantis Productions' recent Legally Blonde and Xanadu, 9 Works Theatrical has announced that they are now rehearsing for The Wedding Singer, the Philippine production of the Tony-nominated Broadway play.

Gian Magdangal and Iya Villania will step into the roles originated by Tony-nominated actor and cult singer-comedian Stephen Lynch and Tony winner Laura Benanti, respectively. Gian will portray Robbie Hart while Iya will alternate with theater actress for the role of Julia Sullivan.

The production is based on the surprise Adam Sandler-Drew Barrymore 1998 hit, which spawned a multiplatinum soundtrack album full of '80s hits, as well as original songs like "Grow Old With You." But the play replaced the '80s soundtrack in favor of an original songs by Matthew Sklar and Chad Biguelin.

"This play is very dear to us, because it's the reason why 9 Works Theatricals was founded," said director Robbie Guevarra, a familiar name to fans of Repertory Philippines productions. "Our company manager, Anna Santamaria, was in a Rep production I directed, and during performances, I used to duck out with Anna's husband Santi. We'd go out for coffee and discuss things, and we started talking about things that we'd like to see in the theatre. For some reason, we bonded over The Wedding Singer, and it was like, 'I love that show, I wonder why it hasn't been done here.' 'Well, why don't we produce it ourselves?' He's a marketing guy, and I could do the artistic end of the company. And because of that, we're here now."

Rehearsals ran for two weeks prior to the September 14 press conference, and full rehearsals began a day earlier, and will continue until October 18, when the production moves to Meralco Theatre for full dress rehearsals.