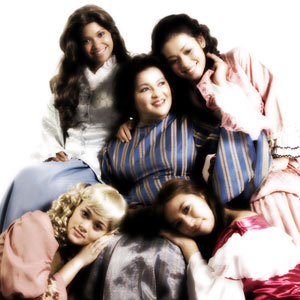 For its traditional December holiday production, Repertory Philippines is staging the family musical Little Women. Based on the novel by American author Louisa May Alcott, this production tells the heartwarming story of the March family: how they overcome challenges and gain love and unity in the process.

"This is a wonderful story that's appropriate for the holiday season," says director Menchu Lauchengco-Yulo. The theater actress-slash-director won the 2009 Philstage Gawad Buhay for Female Lead Perfomance in a Musical for her turn as Mrs. Lovett in Rep's Sweeney Todd. Her most recent directing credit was for the musical West Side Story.

"Audiences will see how the March sisters depend on each other as a family and how they cope as their father is away serving the American Civil War," she says. "They're a fun bunch: brash aspiring writer Jo, romantic Meg, pretentious Amy, and kind-hearted Beth. Audiences will surely be able to relate to these four little women."

With music by Jason Howard, lyrics by Mindi Dickstein and book by Allan Knee, the musical will be staged at Rep's home for the past several years: Onstage Theater in Greenbelt 1 Mall in Makati City.

Little Women has been adapted into at least four anime (Japanese animation) versions and has been made into film versions with Katherine Hepburn and Elizabeth Taylor. The lastest Academy Award-nominated adaptation was done in the mid-'90s starring Winona Ryder, Kirsten Dunst, Claire Danes, Susan Sarandon and Christian Bale.

"The production is also a great learning or teaching tool," she notes. "We encourage educators and parents to make our production part of their December schedule. There is nothing like a live performance to make literature come alive."

Little Women runs from November 20 to December 12, 2010, Fridays and Saturdays at 8:00PM with matinees at 3:30PM on Saturdays and Sundays at Onstage, 2/F Greenbelt 1, Ayala Center, Makati City.