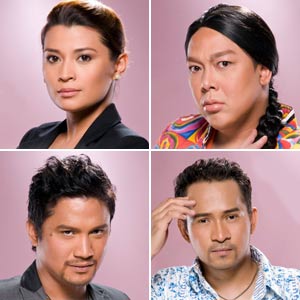 (From upper left, clockwise) Mylene Dizon, John "Sweet" Lapus, Jojit Lorenzo and Andoy Ranay show the harshness of reality TV in Shock Value. This play will be staged at the Wilfrido Ma. Guerrero Theater at UP Diliman until October 3.

As part of its 35th theatre season, Dulaang UP restages Floy Quintos' Shock Value... The Return of TV's Most Beautiful Monsters! Under the direction of Alexander Cortez, this amusing play promises to "show what happens behind show business' blinding studio lights and reveal secrets that only television practitioners are privy to."


This satirical comedy play revolves around a TV host-producer whose indiscretion takes his life on a downward spiral. Jojit Lorenzo and Andoy Ranay alternate in the role of Matt, the embattled producer who becomes involved in a sex video scandal. John "Sweet" Lapus is cast as Wes, Matt's nemesis who triggers his downfall. Sweet alternates with Jomari Jose for this role. Meanwhile, Mylene Dizon alternates with Ana Abad Santos for the role of Rina, the supervisor of Matt.

Originally written in 2006, Floy Quintos' Shock Value has been updated to depict the prevalence of Reality TV on the boob tube. It showcases how real the reel can get, for it is a revelation of how stars are made and it is a confession of the truly expensive price that comes with stardom.


Shock Value is being staged until October 3 at the Wilfrido Ma. Guerrero Theater in U.P. Diliman. Schedules of performances are as follows:

SYNOPSIS. Matt Desaparecidos is a man at the top of his career at WOPTV as a host and producer of the hit program "Shock Value." But one sexual indiscretion with a young sex worker, Jason, is captured on tape by Wes Gachalian, a reporter of the rival station, KOTV.

Thus starts Matt's downward spiral. As he maneuvers to save himself, we meet people whose lives he has affected: Rina, his boss and supervising producer, Dita Manalac-Guevarra, a newscaster, Richie Castro, a slick junior producer, and Jelo Pasiuatan, a talent handler and pro.

We also meet the talents whom Matt has developed: Krista, a fading teen star; Elbert, the current favorite; and little Tweety Girl, a child star with her father Papa Dan; Raquela Roxas, a washed-out sexpot; and Kuya Mike Montero, an icon of showbiz. Through their conversations, we witness how Matt has manipulated their lives and their careers.

At a taping for the special that his station will air to counteract the negative expose against him, Matt and Rina invite Senator Marlon, who is ingratiated to Matt. The senator, however, refuses to help. The ensuing scuffle and the sudden withdrawal of support for Matt ensure his downfall.

Act 2 begins a year later; rival stations have focused on getting the full story of Matt, who has simply disappeared. Rina, now working with the rival network and with Matt's nemesis, Wes, pursues the story.

The truth about Matt and Jason is revealed. Rina and Wes decide to follow the leads and trace Matt to a small island off the coast of Quezon. Both networks follow him there.

They find that Matt has fled the world, and is living on a beach with Ka Temi and his granddaughter, Nogina.

A network war then erupts over his story. Despite the ensuing circus, however, we see Matt seemingly hold on to the last shreds of his dignity.

Is Matt for real? Or is this only what he wants us to believe?