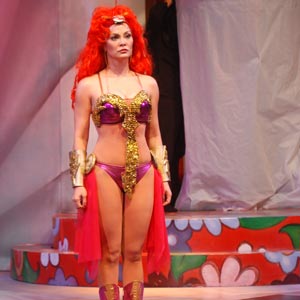 "Tanghalang Pilipino concludes its 24th Season with the power-packed return of its longest running, award-winning original musical comedy. ZsaZsa Zaturnnah Ze Muzikal...Vack With A Vengeance!—the production's 7th run—will be staged at the Tanghalang Aurelio Tolentino, Cultural Center of the Philipines, on February 18 to March 13.


"The production is bound to leave audiences rolling on the aisles again with its zany, madcap and gender bending brand of musical comedy. Eula Valdez reprises her award winning role as the redhaired super heroine.

"She will be joined by new cast members Gabe Mercado (alternating with Joey Paras) as Didi, her frilly mouthed assistant; Pinky Amador (alternating with Kalila Aguilos) as Queen Femina Suarestella Baroux, Zaturnnah's fashionista archnemesis; Rocky Salumbides (alternating with Red Anderson and Prince Stefan) as the hunk with a heart—Dodong—Zaturnnah's object of affection.

"The piece was brought to the attention of Tanghalang Pilipino by stage director Chris Millado for inclusion in their Theater Season.

"The graphic novel was adapted for the stage by Chris Martinez for Tanghalang Pilipino, with Vincent de Jesus creating the words and Chris Millado directing the musical theater staging. Since it's opening in 2006 ZsaZsa Zaturnnah Ze Muzikalhas attracted growing, diversified and returning audiences while garnering rave reviews from mainstream critics, bloggers and by word of mouth.

"ZsaZsa Zaturnnah Ze Muzikal...Vack With A Vengeance opens on February 18 and runs until March 13.