Roeder Camañag takes part in Orosman At Zafira, which will be staged until February 26 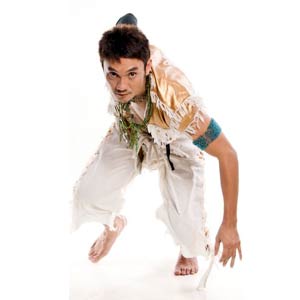 Francisco Baltazar's Orosman at Zafira will run until February 26, 2011 (Fridays and Saturdays) at the SM Mall of Asia Centerstage Theater. Roeder Camañag will portray a villain named Abdalap in this play.

Actor-performer Roeder Camanag does in theater what a regular mainstream TV and movie actor does; that is, juggle his time for at least five consecutive stage plays.

In August, he appeared in the Dulaang UP musical Orosman At Zafira (as Boulasem, ruler of Tedenst tribe) and before the year was over, did three roles (as Jason/Creon/Aegeus) in a thesis production of Greek dramatist Euripides' Medea, with award-winning actress, Irma Adlawan).

Two of these productions, Banaag At Sikat and Orosman At Zafira had Roeder doing an almost simultaneous appearance.

"It was tough!" he told PEP (Philippine Entertainment Portal) in an interview before the start of the opening for this year's grand restaging of Francisco Baltazar's Orosman At Zafira, held at the Mall of Asia Centerstage on February 4.

The seasoned thespian has no reason to complain, though. For he loves to act and does theater like it's second nature to him.

LIKE A PUZZLE. In the current version of Orosman At Zafira (OZ), Roeder is playing the role of Abdalap, a ruthless villain, also from Tedenst, led by his father, Boulasem (Nazer Salcedo). Abdalap is the brother of Orosman (played by Jay Gonzaga), the love interest of Zafira (Delphine Buencamino and Maita Angeli Ponce alternating), the princess-daughter of Sultan Mahamud (Neil Tolentino). Sultan Mahamud, the leader of the Marueccos Tribe, has Gulnara (Jean Judith Javier) for his wife.

Last year, Roeder did Boulasem, a more sober but equally fierce character. The other warring tribe of the classic epic poetry is the Duquela, led by its ruler, Zelim.

What can Roeder say about the challenges that go with playing each character?

"But playing both Boulasem and Abdalap has a common challenge, that is, the language," Roeder stressed. "'Ang pinakamasarap gawin sa pagganap sa kanila is to make sense [out of the language]. Kasi nga, di ba, we all know na 'yung Balagtas [pseudonym of Francisco Baltazar, the 19th century Tagalog poet] language, napaka-'archaic'?

Roeder's first exposure to the Balagtas komedya was when he did the Florante role in Baltazar's more famous classic epic poetry, Florante At Laura, which is regularly produced and staged by another theater company, the Gantimpala Theater Foundation (GTF).

ORIGINAL FILIPINO MUSICALE. The February 4-26, 2011 stagings mark the musical's second re-run. It was in 2008 when Dulaang UP initially staged Orosman At Zafira. The students' response was overwhelming. Encouraged by the unexpected turnout of viewers, the University-based theater company's production heads, led by Artistic Director Alexander Cortez and OZ's director/choreorgapher, Dexter M. Santos and musical director, Carol Bello, thought of bringing back the musical production as part DUP's 35th Theater Season in 2010. Again, it was met with much enthusiasm, with SRO performances.

"We're very much satisfied with the response from students and other theater goers," enthused Alex Cortez. "Doing another staging actually started with us doing its re-runs. Our (DUP) finances is in dire need of, you know, a shot in the arm. So we decided to bring it to MOA.

"For the 35th theater season of DUP, we thought of bringing back the hits," Cortez said. "So we had OZ, Shock Value, Isang Panaginip Na Fili, and this February, too, we'll have Amphitryon (at the Wilfrido Ma. Guerrero Theater), with playdates, from February 16 up to March 6 this year."

"Like other theater companies, Dulaang UP also suffered due to the natural calamities; the onslaught of typhoon Ondoy affected us, financially, and we need to get back the losses. When our marketing group (led by Atty. Darwin Mariano and Mr. Carlo Francia) saw the musical the first time, they already wanted to bring it somewhere. So, they talked to Cherry Bong (Edralin, of DUP Marketing) and us, we met and 'yun na. Contracts were immediately signed and in no time we're going full blast.

"I hope it makes good," Cortez said. "I'm always partial to Filipino musicals, though, I think, these (productions) are hard to sell."

THREE-DIMENSIONAL. Actor Reuben Uy, who previously portrayed business tycoon, Eugenio Lopez, Sr., in STAGES' bio-musicale Undaunted, got so much praises for playing the role of Abdalap in Orosman At Zafira's previous successful runs and re-runs. He considers Abdalap, "one of the greatest roles ever created for the stage."

For Roeder Camanag, who is now given a most challenging task of reliving the same role, the challenge lies in one's interpretation of the character.

Otherwise, the current OZ production, with its characteristic bigness, is pretty impressive.

The working relationship of the cast members, which is an interesting blend of veteran and neophyte theater actors, can be described as harmonious. Roeder, an Aliw awardee for best stage actor (in 2007), talks about his co-actors with much enthusiasm.

Same goes with JM De Guzman, whose current preoccupation as actor in mainstream television soap operas, like Alyna, hindered him from reprising the role of Zelim (a heroic character from the Duquela tribe), which he competently tacled in the OZ 2010 re-runs.

ARTISTIC DIRECTOR. Apart from his regular stage acting stint, and while at present busy with the forthcoming OZ production, Roeder regularly finds time supervising the production of a rock musicale, Junto Al Pasig, a project of the government-sponsored theater company, the Valenzuela City Center for the Performing Arts (VCCPA). Roeder Camanag is its artistic director.