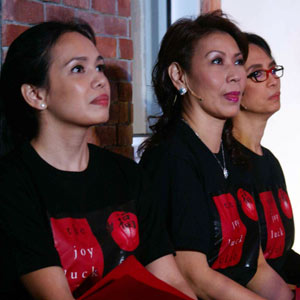 (L-R) Ana Abad Santos, Rebecca Chuaunsu, and Joy Glorioso are cast in Repertory Philippines' The Joy Luck Club. Directed by Anton Juan, this play will be staged from February 4 to 20, 2011 at Onstage Theater, Greenbelt 1, Makati City.

"Former college editors of the country's leading school papers belonging to Batch 69 to 72 have organized themselves into the LEADS-CEGP 6972, Inc. to promote the cause of campus journalism and pursue various advocacies on education, health, environment, good governance and financial literacy.

"To sustain its plans and program, CEGP-LEADS 6972 is launching a benefit show, with Toyota Motors Philippines as presentor, featuring the play adaptation of The Joy Luck Club, by Repertory Philippines. The play is based on the best-selling novel by Amy Tan, which was also made into a movie directed by Wayne Wang.

"Repertory Philippines is staging The Joy Luck Club from February 4 to 20, 2011. LEADS-CEGP has booked the February 19 matinee showing of the play on February 19, 2011 at 3:30 p.m. at the Onstage Theater at Greenbelt 1, Makati City.

"Vic 'Wency' Wenceslao, group spokesman for the project, said that "we owe it to the next generations of campus editors to open up opportunities for their advancement."

"We plan to open up more scholarships, lend the talents and experience of our ranks to the younger generations through skills training while at the same time paving the possibilities for our members to pursue their own preferred advocacies," Wenceslao said.

"The group prides itself for its members who have made their mark in their respective fields and who continue to value idealism and pride of country. After some 40 years, they held a reunion October 10 last year. A rekindled community spirit led them to pursue their vision as a more formally-constituted organization.

"The Joy Luck Club tells the lives of four Chinese immigrant women and their four American-born daughters. The four mothers create a mahjong group called the Joy Luck Club and audiences will see the stories of the members of this club unfold.

"Rep associate artistic director Menchu Lauchengco-Yulo says, "It's a great way for families, friends and couples to celebrate Chinese New Year, which kicks off the month on February 3. The show will be great for Valentine's dates as well."

"For ticket inquiries and other information on the February 19 matinee showing, contact the LEADS-CEGP Secretariat at 406-8245 or 0917-3300992 or email to mandy@manaloto.net."