Musical dramedy Care Divas will be staged until March 13 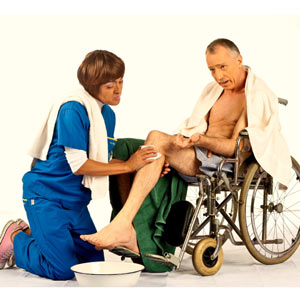 "PETA's newest musical dramedy Care Divas is packed with explosive dance numbers, fancy music, comedic antics, and a visual feast of men wearing boas, wigs, high heels and a whole lot of shimmer. Offhand, it may easily sound like a "gay play," but behind the whimsy of this production is a daring plot that renders a rather colorful interpretation on the issue of migration.

"PETA's Care Divas is a highly physical, visually exciting play inspired by general life-stories of ordinary individuals like Overseas Filipino Workers (OFW's) who strive to earn a living in another country. The plot is not a story of epic proportions as it focuses on a seemingly insignificant community of gay OFW's in Israel who work as care givers of elderly Jews in the morning and pursue their own personal dreams as drag performers at night.

"The play's director, Maribel Legarda (2009 Philstage Nominee for Outstanding Direction), describes Care Divas "as a very filmic play" that is threaded invisibly by artfully choreographed movement and dissolving moments of tears and laughter.

"The production is based on composite stories developed [through] several interviews and research done by Palanca award-winning playwright, Liza Magtoto.

"I'm sure the research I've made are still not enough, but hopefully it would more or less concretize or create specificity of the setting, and how these affect Pinoy care givers in Israel," Magtoto says.

"The text is deeply moving and personal with many elements of universality, but is also highly theatrical and wickedly funny. Coupled with the color and pizzazz, there are also lovely gentle moments that mull over the lonely lives of the main characters who struggle to find themselves a place in a strange society.

"This production is more than just a gay play for me. It is a story of migration and how the dark, dirty and dangerous work that will be encountered by a majority of overseas Filipino workers can, in the hands of a resilient and loving people, be turned into a life filled with camaraderie, adventure and passion for life," Legarda shares.

"The stage, designed by Leo Abaya (Urian, Famas, MMFF, Star Awardee), is like a neutral canvas that changes as a small cast of ten highly-talented actors fill it with intense, dynamic and joyful performances. The bright color palette of the costumes, designed by New York-based designer, John Abul, provide a strong contrast to the stage.

"As with all other PETA plays, PETA hopes that the audience will see beyond the flamboyant costumes, gay humor, wacky antics and song and dance numbers—and start to ask, as well as reflect on critical questions about Pinoy migration.