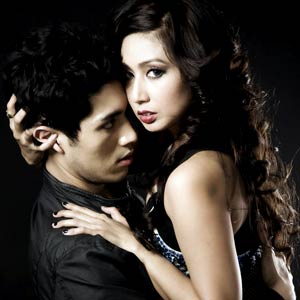 Gian Magdangal and Sheree topbill Rent, a musical play about starving bohemian artists. Despite poverty and illness, they all learn to struggle with life and survive during the rise of a mysterious, deadly disease: HIV-AIDS. Eventually, they learn to fall in love and find their voices through a universal message of hope for everyone. Sheree alternates with Ciara Sotto in this play that will run until March 6 at the RCBC Plaza in Makati City.

If life continues to imitate art and there will still be people brave enough to live out their passion, Jonathan Larson's phenomenal '90s musical will remain relevant and exciting.

9 Works Theatrical rolls out the musical again after its successful run in February and December last year. Rent-heads have a month to catch the shows.

Director Robbie Guevarra reassembles the old cast and invites new actors to bring to life once again the timeless story of impoverished young artists struggling to survive in New York's Lower East Side.

The talented young characters pride themselves in their defiance of convention but at the same time mourn the passing of time because most of them suffer from HIV-AIDS, then a mysterious disease discussed only in support groups.

Their daily lives are a mixture of deprivation (Tune Up #1, Tune Up #2, Rent), artistic frustration (One Song Glory) and, self-doubt (Will I?), but in general a sense of pride in the path they chose (La Vie Boheme).

As one character in the HIV-AIDS support group says: "I'm a New Yorker, fear is my life."

The musical opens in a sparsely furnished loft with a few crates serving as tables and an illegal wood burning stove in the middle. An answering machine lies on the floor, occasionally emitting strong feedback sounds. On the right side of the loft is a tall modern sculpture made from scrap metal and discarded parts of domestic appliances.

From the very beginning, we are thrown into their lives in an exposition so rapid it does not make sense at first.

Act One opens with Mark filming in the loft as his roommate Roger tunes a Fender guitar he hasn't played since his girlfriend committed suicide after finding out they were HIV-AIDS positive.

Marks's mother calls, complains about the loud feedback from the answering machine, and reassures him about his ex-girlfriend Maureen dumping him for a woman.

Tom arrives in the apartment but not before getting mugged. Benny then comes in demanding rent despite his promise to let them live there for free.

Meanwhile, Joanne prepares for Maureen's performance while protesting Benny's plan to develop a lot where many homeless people live.

As the musical progresses, their lives become intertwined in complicated but all too real scenarios.


The challenge for Rent has always been its length and complex plot. The audience has to absorb the simple, but numerous storylines.
Those who have the attention span of a gnat, may be taken aback with speed of the exposition, wondering how the knots would come undone because an hour and a half has passed and it is only the first act.

The play's director should be credited for assembling a vibrant cast that captures the idiosyncrasies of the denizens of downtown New York.


Worth noting is Mian Dimacali's performance of "Over the Moon," a number which I can only imagine must be difficult to sustain.
From that point near the end of Act One, we were looking forward to seeing her.


(Although I get tired just thinking how on earth Sheree managed to pole dance while singing. It's pretty awesome.)


But my favorite part of the musical is—and forever will be—Roger and Mimi's performance of "Another Day." In this part, Roger rejects Mimi's affections for various reasons as she asks him to seize the passion of the moment. She sings: "There's only us, there's only this. Forget regrets or life is yours to miss. No other road, no other way, no day but today."


This part I always compare among other performances and recordings and, I must say, that of Sheree and Gian was not found wanting. I did wish though that Gian's Roger had more ferocity to counter Sheree's Mimi whose singing was slightly raspy, slightly sweet, and whose demeanor was very sexy.


Now when the company joins Gian and Sheree, hold it. Try very hard to not sing along. Save it for when Mian encourages the audience to moo with her.


Expect to have a good time with the new Philippine production of Rent. Who knows? Seize the remaining shows and you just might find your song.

No day but today!

Rent will be staged on the following dates: