Celebrities give their assessment of Next to Normal, the rock musical topbilled by Menchu Lauchengco-Yulo 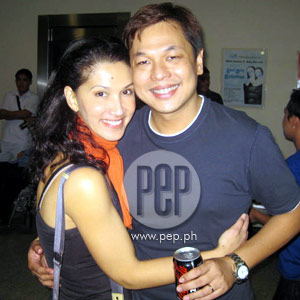 Menchu Lauchengco-Yulo and Jett Pangan led the cast of Next to Normal, a rock musical mounted by Atlantis Productions.

"I'm overwhelmed! I've never experienced something like this, talagang overwhelmed ako! The role is so demanding and the audience response was very amazing!" gushed Menchu Lauchengco-Yulo after her last sold-out performance for the Atlantis Productions musical, Next To Normal. It was held last March 27 at the Carlos P. Romulo Auditorium, RCBC Plaza, in Makati City.

The award-winning actress was given a standing ovation for portraying the very difficult role of the mother of two children, Gabe (portrayed by Felix Rivera) and Natalie (played by Bea Garcia). Menchu's character named Diana had difficulty coping with depression and was subjected to various kinds of medical and psychiatric treatments.


In the process, everyone, including husband, Dan (Jett Pangan) and even daughter Natalie's (Bea Garcia) boyfriend, Henry (Markki Storem) struggled with the family's dysfunctionality resulting from Diana's mental imbalance.

CELEBRITY GUESTS. Philippine Entertainment Portal (PEP) took the time to chat with some of the guests at the auditorium lobby, after the show and asked what they liked most about Next To Normal.

"I think the performances were brilliant! Sobra! Ang galing talaga ni Menchu (Yulo) at ni Jett Pangan," said Bianca Gonzales. The lady host of SNN had no special date that evening and was in the company of Abunda and Tim Yap. As much as she can, ms. Bianca said she regularly watches local straight plays and musicals. "I like it here, in RCBC (Plaza), with its regularly-staged local productions."

Boy Abunda was in a rather pensive mood when first sought out by PEP for his reaction on the musical he has just seen.

"I'm so affected... kasi may nanay din ako," related Boy. But for that night, the acknowledged King of Talk seemed at a loss for words in describing how he felt about the play and the performances of the cast, especially Menchu, whom he so admired for her delivery of such a difficult role.

Tim Yap, on the other hand, was half-joking when he told us what he liked most about the musical play. "What I liked most? That Bianca (Gonzales) was there!" he said. "I saw Bianca and... oo, sira-ulo, yeah, I am, kinda... but can cope well, too," he smiled.

Comedian Gabe Mercado had a more serious assessment of Next To Normal. He himself had just taken part in Tanghalang Pilipino's musical,Zsa Zsa Zaturnnah... Vack With A Vengeance!, wherein he played the hilarious character, Didi (lead gay character, Ada's sidekick),

"What I like most was its sensitive topic, pero and ganda-ganda ng pagkakasulat at pagkaka-kanta; hindi overly-dramatic, but realistic," noted Gabe. "'Yung acting nila was perfect! So, it was perfectly acted; perfectly casted, everything! Napa-'Wow'! talaga ako! Amazing! A most perfect show I've seen in a long time!"

Music composer and actor, Vincent De Jesus, was all-praises, too, about the musical. "This one... malinis, and heart-wrenching," he said, referring to the play's music. "Nagpipigil nga akong umiyak, nawala and boses ko. Ceejay (Javier, who led the Band, on Keyboard 1) is a good friend..."

Some compare the local production of Next To Normal, with its original music by Tom Kitt; and Book and Lyrics by Brian Yorkey, to world-class performances on Broadway. Jojit Lorenzo also shared this observation. "At least, may mga gumagawa nito dito, na yung hindi nakakapunta doon [in New York City and elsewhere], nakakapanood dito. At sana, napapanood ito ng iba pa."

SUCCESSFUL RUN IN MANILA. The local staging of Next to Normal is headed by director Bobby Garcia. The play has been honored worldwide with accolades such as the Pulitzer prize in 2010, and 3 Tony Awards won in 2009, including best score, best orchestrations and best actress in a musical for Alice Ripley, as the mother. Locally, Atlantis Productions staged the play in Makati City (for three weekends, from March 11 to 27, 2011; a total of 13 shows including Sunday matinees).

Theater veteran Ms. Liza Infante-Robinson counts herself as one of the fans of this performance. (She had a similarly laudable performance in the recently-staged Repertory Philippines play, The 39 Steps, directed by Ana Abad Santos).

"I thought the cast was brilliant!" Ms. Liza mused. "Of course, you know, Menchu Lauchengco-Yulo, Jett Pangan, Felix Rivera.. I mean, they were so tight!

"Even Lea Salonga was saying, 'Compared to the European production...', she [Lea] felt this one, was "actually better"! And you could see how the cast worked. So well, 'di ba?

"I thought the material was also very beautiful," added Liza, "and it touched on so many different things that Filipinos could relate to; very ma-drama."

Liza agreed with the observation about the universality of the play's theme centering on deep motherly affection that actually brought about the character's mental imbalance.

"Yeah. And the whole thing about medication and how it sometimes fails also," she noted. "But the music is beautiful, as it changes dramatically (from one point, in each act of the play). It's so hard to pick what exactly is my favorite thing (about the play), but, I mean, without being (biased, perhaps), my favorite thing in the show is Menchu Lauchengco-Yulo. Absolutely brilliant!"

Among Menchu's memorable numbers in the musical were the ones she sang solo, like I Miss The Mountains, You Don't Know, The Break and So Anyway, among others; her duets with Jett, as husband Dan (How Could I Ever Forget? and It's Gonna Be Good); with Bea, as daughter Nicole (Wish I Were Here and Maybe/Next to Normal), and the finale, Light (Menchu with co-actors, Jett, Bea, Felix, Markki Stroem, and Jake Macapagal, as the psychiatrist)